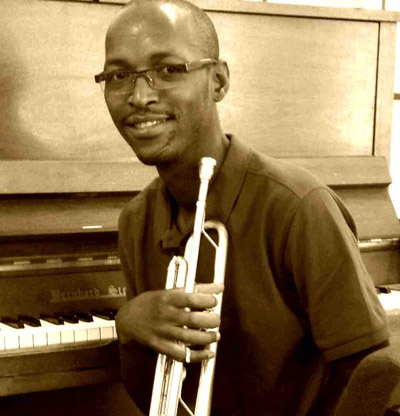 Mzamo Bhengu was born in 1980 in Witbank. He started the trumpet at the age of 9 in church at the Salvation Army. Started to have professional teacher in Durban at the Durban music school under Anecha Meyer from Austria when he was 13 under community project Siyakhula started by Brian Thusi one of the prolific jazz trumpeters of uMzansi.

After matric he went to study at Tut formerly known as Pretoria Technikon. Where he was doing B tech music in 2001 and 2002 he was the member of the National youth jazz band selected annually at the Grahamstown jazz festival.

Since then he has been playing with many different Bands and Artists. To Name a few Jonas Gwanga, Themba Mkhize, Vusi Khumalo , Jimmy Mgwandi, Barney Rachabane, Marc Duby, Kevin Davidson,Abdullah Ibrahim, Feya Faku, Khaya Mahlangu also played with the Temptations and Clarence Carter when they came for the Joy of Jazz in the country. Also did a couple of theatre shows abroad.