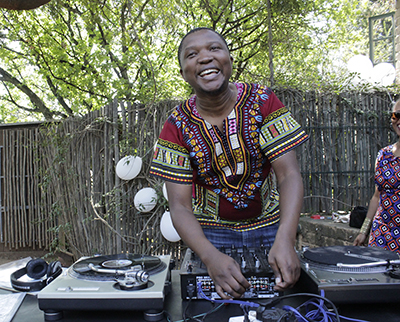 Mxolisi Makhubo is a Joburg-based architect who moonlights as a vinyl-only deejay. His deejay approach is built around what he calls the ’folding of time’, which he conceptualises as a sonic mash-up of music, old and new, into a singular danceable hybrid. Although Mxolisi’s musical foundations are as a deejay for the hip-hop group, The Pharaoh Express, his musical palette has broadened to include all music that sits on inspiration palette of hip-hop: this ranges from jazz to electronic dance music and is guided by its danceability rather than genre.

Mxolisi has shared the stage with The Blue Notes Tribute Orkestra, Cold Cut(UK), Matsuli Music (UK), and Kid Fonque. He runs a music blog called “Familiar Favourite” which archives stories about musical practitioners and their role in the production of urban culture.