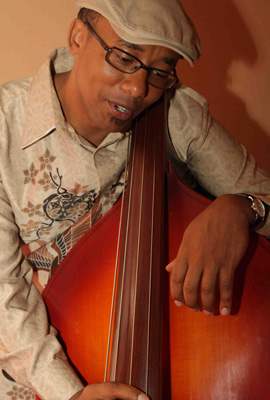 Musa Manzini was born at Inanda, north of Durban, Kwa-Zulu Natal. In 1986 he then moved to Cape Town for high school and university studies. It was later in his high school days that he first picked up the guitar just as a hobby, but was hooked to it ever since. “I was faced with having to choose between music as a full-time career or becoming a lawyer which is the career my parents had carved for me. At one point, I thought I could be a lawyer who plays the bass”.

In 1995, while at UCT, he received the Prof Peter Klatzow Award for composition and
orchestration “It was a big challenge coming from the township and being introduced to classical music at tertiary level, having to analyse the music of Bach, Chopin, Mozart, Debussy, Schonberg and other European composers” After graduating with a BMus degree, Musa spent three years as a part-time lecturer at UCT instructing electric and acoustic basses, jazz theory and improvisation to bridging course students, while at the same time performing and recording as a session musician around the country with musicians like Rene’ MacLean, Jimmy Dludlu, Jonathan Butler, Gavin Minter, Nhlanhla Magagula, Kevin Gibson, Mark Goliath, Judith Sephuma, Winston Ngozi, Sipho Mabuse, Menyatso Mathole, Selaelo Selota, Joe McBride, UCT Jazz Orchestra and many other muso’s at that period.

Manzini’s style and sound has been honed by the multi-facetted Cape flats music scene, mostly the townships of Guguletu, Langa, Mitchell’s Plain and Khayelitsha. Manzini plays the bass as alead instrument pioneering in the footsteps of Sipho Gumede, Stanley Clarke, Marcus Miller and John Patitucci. He is also well versed on the acoustic or double bass.

In 2000 Musa released his debut recording entitled “New Reflections” through BMG Records Africa, and was at the same time introduced into the film and television industry by Mfundi Vundla, where he worked on daily drama series like Backstage and later Generations as film scorer and musical director.

In 2002, Musa released his second album “Tributes and Memories” with Gallo Jazz, which has received extensive airplay and recognition nationally and internationally, at the same time saw the birth of Manzini Entertainment (Pty) Ltd which would take ownership of his music and facilitate the recording of other artists, as well as empowering them with compositional and publishing tools thereby enabling them to take control of their destiny in the music business.

Musa has performed in many continents and countries which has enabled him to be a well round musician, drawing experiences from these travels and learning the different world cultures; North Sea Jazz Festival, New Orleans, Joy of Jazz, Muscat, Jazzathon, Artsalive, Sao Paolo, Santiago de Chile and Buenos Aires, as well as many other jazz club performances, functions and musicians’ workshops and university master classes.

In 2004, Musa Manzini released “My Bass”, licensed through Sheer Sound, which today still continues to receive extensive airplay and popularity as a contemporary urban style of music both locally and internationally. He also embarked on part-time study towards a Post-graduate Diploma in Marketing Management through University of South Africa.

In 2007, Musa Manzini released “Simply Life” with Sheer Sound Licensing featuring the popular hit song “Esikhawini” and many more. Musa Manzini has survived two brain operations (craniotomy) to remove a tumour, benign luckily, and is back on stage. ”Musa, one of South Africa’s great bass players, is now back to the live music scene with a bang. After his flourishing music career was temporarily inconvenienced by two brain operations, fans can now look forward to his usual thunderous bass performances”.