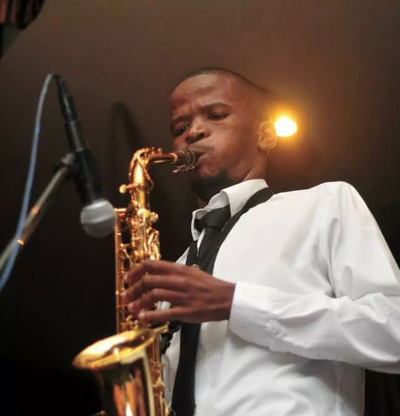 Mthunzi Mvubu was born and raised in Daveyton where he started his music career at the age of 14. In his early teens he enrolled for music classes at the Music Academy of Gauteng in Daveyton under the mentorship of Dr. Johnny Mekoa where he studied music theory and piano. He then later changed to the alto saxophone and was quickly awarded the lead alto chair in the Music Academy of Gauteng Youth Jazz Orchestra under the directorship of the legendary Dr. Johnny Mekoa.
While in the MAG(Music Academy of Gauteng) Jazz Orchestra Mthunzi had the privilege to share his musical experiences and rub shoulders with international counterparts during the visits in countries such as England, Sweden, USA, Germany, Russia to name a few.
During the USA tour, he played at 32nd annual IAJE conference where he and other MAG students were awarded a Special Citation for Outstanding Musicianship.
He was also a part of the MAG big band that accompanied Kevin Mahogany and Everest Greene. In South African Standard Bank Joy of Jazz Festival, Mthunzi had the privilege to be part of the horn section backing the Legendary American groups such the O’Jays on their tour in South Africa. He was part of the South Africa chosen Horn section accompanying the Temptations and Clarence Carter (USA).
Like many other musicians who like to explore Mthunzi worked at the Seoul Sun International Hotel in South Korea.
He has worked on stage in and around Africa working with some of the finest musicians like Abdullah Ibrahim, Themba Mkhize, (the late) Victor Ntoni, Feya Faku, Tsepo Tshola, Jason Yarde, Andile Yenana, Musa Manzini, Jimmy Dludlu, Jonas Gwangwa, Herbie Tsoeli, and Thandiswa Mazwai.
He ventured in to music teaching, theory and alto-Saxophone practical. With the experience and undoubtedly passion for music he is working on his debut album.