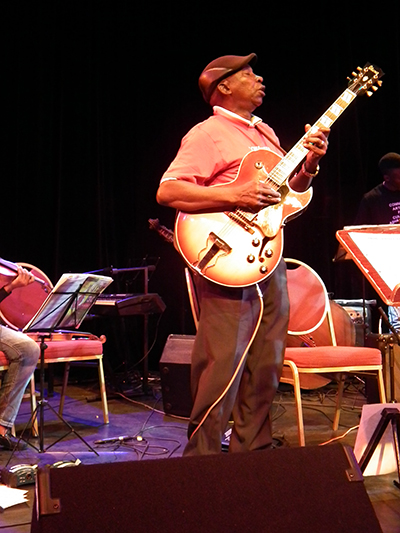 Moss grew-up during the days of Marabi and Kwela music, dominated by the penny whistle wizards of the early sixties. He was also privileged to have come from a family and an environment that was rich with indigenous multicultural traditional music.

The late Frans Mothoka Maake, popularly known as “Matascar” inspired Moss, and the late Charlie Thobejane, two of the most accomplished Marabi guitarists and penny whistle musicians of the time. They periodically played both as a duet and as trio (with Moss joining them) to entertain at wedding ceremonies. Amongst the people who inspired him are Ernest Mothle, Phillip Tabane, the late Ernest Cole and Geoff Mphakathi who exposed him to a broader spectrum of other practitioners of the art form such as Wes Montgomery and Lesley Spann, just to mention a few. These artists proved to be an enormous inspiration to him.

Moss is basically self-taught. His technical development was achieved with tremendous speed, due to his immense love for music and the instrument. Gabriel Mabe Thobejane was his first drummer (percussionist) and replaced by Oupa Monareng who later switched to bongo drums after joining Phillip Tabane & Malombos. Amongst musicians/ groups he played with includes Four sounds plus three, SABC resident band conducted by Victor Ntoni during the Astera 1 and 2 awards, Ernest Mothle, the late Kippie Moeketsi, late Duke Makasi, Barney Rachabane, Stompie Manana, Allan Kwela, Lefifi Tladi and Bheki Mseleku, just to name a few.

Apart from leading his band he conducts music workshops from time to time around Pretoria. Moss is a founding member of Committed Artists For Cultural Advancement (CAFCA) and he teaches guitar at Cafca music project in Mamelodi. www.cafca.co.za