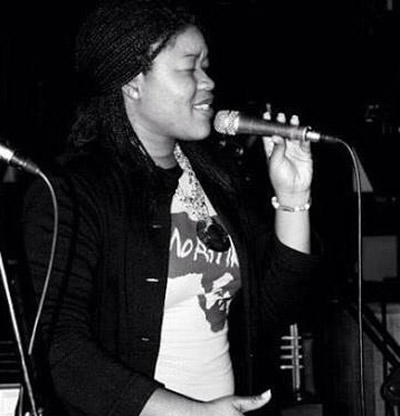 MoAfrika ‘a Mokgathi is a poet, speaker, award winning radio presenter/ producer, playwrite, arts codes adjudicator, facilitator, business women, event organizer and more. MoAfrika is known for her Sepedi pen and her reciting style using code switching and code mixing of English and Sepedi Language, fused with jazzy/soul/kiba vocals and rhythm. Some of her works have been published on online platforms. Recordings include ( Ndoza kuswa) 2014 on Nduduzo Makhathini´s album “Sketches of tomorrow “.

Her love for the Arts stared when she was 13 years old, instilled by her late uncle (GoMoMo) Godfrey Modiba Mokgathi, and since that tender age she never looked back .

MoAfrika has been performing poetry professionally since 2006. During her journey she has performed alongside remarkable poets of her time nationally and internationally acclaimed. Natalia Molebatsi, Kgafela o a Magogodi, David wa Maahlamela, Phillipa ya De Villiers, Holly Bass (USA) just to name a few.

She has headlined Night of the Poets twice and some of her performances include: Vavasati women Music festival, Moretele Park Legends Festival and honorary dinner, and a lot more festivals /Mzantsi Fela Festival/Feast of the clowns festival /Indigenous

MoAfrika is the founder of the most prestigious poetry sessions in the capital city. Tshwane “Voices of Expression “that will be publishing its first publication late this year (2015) “Mamelodi 10”