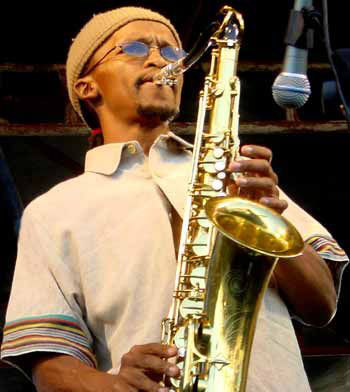 Born in 1959 in Cape Town’s historic Langa township, South Africa. Reedman McCoy Mrubata grew up with the sounds of African music: the soulful hymns of the Zion Church, the chants and rhythms of traditional healers and the brassy jive of the Merry Macs band who rehearsed opposite his home. When schooling became impossible in the fiery aftermath of the 1976 uprising, the young McCoy then playing flute studied informally under Langa greats like Madoda Gxabeka, Winston Ngozi , the Ngcukanas, Ezra and Duke, Blackie Tempi and Robert Sithole.
By the early 1980s he was playing in cover bands like Fever, Touch , Airborne and Vukani, from there he moved to crossover outfit Louis and the Jive. In 1987 McCoy was spotted by bandleader Sipho Hotstix Mabuse who helped him make Joburg his home. In 1988 he joined PJ Powers band and also that year McCoy was sported by veteran producer Koloi Lebona who offered him a recording deal with a British based record company Zomba Records the same record company had produced music for, amongst others: Jonathan Butler and Billy Ocean. McCoy’s debut album, Firebird was released the following year.
In 1989 he formed Brotherhood, which also included guitarist Jimmy Dludlu pianist Nhlanhla Magagula and Lucas Khumalo and later Moses Molelekwa. In 1990 the band won the Gilbey’s Music for Africa competition.
In 1992 he began touring with Hugh Masekela’s Lerapo, alongside guitarist Lawrence Matshiza and pianist, the late Moses Molelekwa among others. He also created his own bands, Cape to Cairo and McCoy and Friends. In the mid 1990s, he made the first of a series of albums as leader for the independent Sheer Sound label: Tears of Joy. The personnel of Friends, including pianist Paul Hanmer, bassist Andre Abrahamse and trombonist Jabu Magubane among others have formed a consistent team of collaborators for McCoy. Since those days, more albums have followed: Phosa Ngasemva, Hoelykit, Face the Music which won the 2003 South African Music Award in the Traditional Jazz category and Icamagu Livumile which won the same award in 2005, as well as the compilation CD – Best of the Early Years. Brasskap Sessions Volume 1 won the 2008 award.
In addition, McCoy has collaborated with a dazzling array of South African jazz players, and with overseas artists such as Airto Moreira and Flora Purim. He has been involved in drama, creating scores for South African productions about journalist Bloke Modisane and saxophone legend Kippie Moeketsi, and in 2001 starring in a Norwegian production based on the life of John Coltrane. He has also created what he calls the Young Friends: a collaboration with the next generation of South African jazzmen.
McCoy’s other projects Include Kulturation a duo-led album with pianist Wessel van Rensburg exploring new interpretations of tunes from the African and Afrikaans communities. This project blends together familiar tunes from the Xhosa and Zulu cultures with Afrikaans folk music tunes fusing these into contemporary versions of local South Africa music. Vivid Africa, is another collaboration with multi-instrumentalist Greg Georgiadis, using instruments like oudh and bouzouki alongside saxophones to explore the musical spices of the East African coast. McCoy was also a member of a super band Sheer All Stars which consisted of some of the best musicians In SA Jazz : the late Sipho Gumede,Errol Dyers, Paul Hanmer,Frank Pako, Wessel van Rensburg and Louis Mhlanga. They recorded three albums; Indibano, Live at the Blues Room and Dance With Me.
McCoy and his long time friend Paul Hanmer recently released a CD that was recorded live In 2009 at Alte Kirche Boswil, Switzerland during the Kulak Jazz festival. In January 2011 he collaborated with Norwegian musicians In project called Indibano and they performed at the Nordic Black Theatre In Oslo. McCoy also conducted the South African Youth Jazz Band this year In June/July at the Grahamstown festival and they also performed In August at the Joy Of Jazz In Newtown JHB South Africa.
McCoy also produces, teaches and spends a lot of time, as he puts it, simply being a family man. “My ambition is to keep our kind of music alive here at home. Everything I do is about linking the now to the community I came from all those years back in Langa, and sharing my South African experiences through music with the rest of the continent and the world.”
McCoy now lives in Johannesburg with his family. He is married to Zodwa and they have four kids, two boys and two girls.