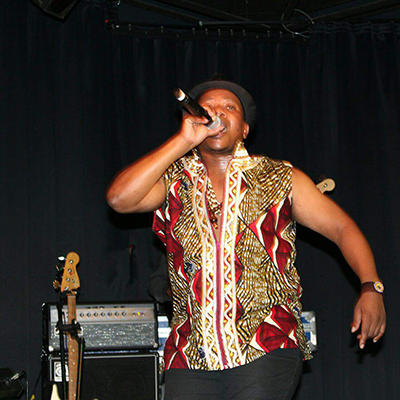 Max-Hoba is an accomplished AfroSoul and World music artist from South Africa. His sultry velvety voice and ability to play around with language have earned him much respect across different audiences. His music speaks of love, unity, social ills, tolerance and day to day life issues.

A former ambassador of Oxfam Pan Africa in the campaign on climate change, he is an advocate for equality and a just society. He is also an experienced voice-over artist and language advisor specializing in IsiXhosa, Sesotho and English.

Max-Hoba has two acclaimed albums under his belt released fully independent on his label Maxhoba Entertainment. He is a SAMA and Wawela awards nominee for his album Traveling Man, which peaked at no.2 on the CMJ New world music charts in the USA.

He is the founder and producer of Back 2 The Music, a platform for upcoming and established Vocalists to get together and showcase while taking time to pay tribute to artists that influenced them.
He is the co-producer and brains behind the exciting AFROSOUL MUSIC IN THE PARK CONCERT which takes place annually at the NIROX SCULPTURE PARK just outside Johannesburg. https://www.afrosoul.org

For the past three years, he has been steadily making inroads in the European Live music circuit thanks to the support from DTI and Imexsa.