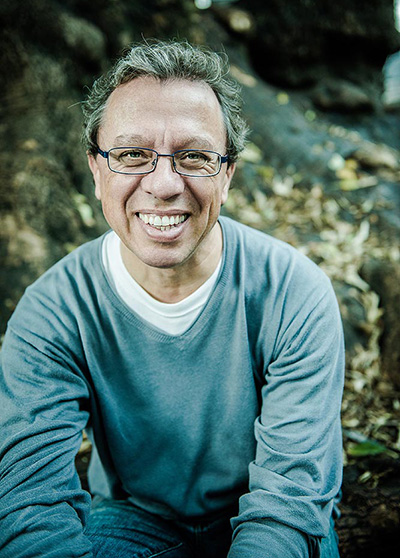 Working as a musician for more than twenty years, Mário Laginha is usually connoted to the jazz world. But, if it’s true that in the beginning he followed a predominantly jazzy path – he was one of the founders of the Sexteto de Jazz de Lisboa (1984), he created the Mário Laginha Decateto (1987) and he leads his own trio, – the musical universe he has constructed with singer Maria João is a tribute to all the music he loves – beginning with jazz, but including Brazilian, Indian and African music, pop, rock and, of course, the classical basis that was present in his academic studies and that would influence his first solo project, inspired by Bach’s music (Songs and Fugues, 2006).

Mário Laginha has articulated his strong musical personality with a strong will to share his art with other musicians and creators. Firstly, with Maria João, which resulted as one of the most consistent and original on Portuguese music, with over than ten albums released and hundreds of concerts in venues and festivals all over the world (Montreaux Jazz Festival, North Sea Jazz Festival, San Sebastian Jazz Festival, Montreal Jazz Festival and many others). Secondly, at the end of the 80’s, with classical pianist Pedro Burmester, with whom we would record a CD  – a duo enlarged to a trio with Bernardo Sassetti, in 2007, for the project “3 Pianos”, with a CD and a DVD recorded, besides a dozen of concerts strongly acclaimed by the audiences and the critic. Till his unexpected disappearance, Bernardo Sassetti was one of Mário Laginha’s musical partners and accomplices, with many dozens of concerts and two CD recorded, the later of which dedicated to José Afonso’s music.

His most recent works are “Mongrel”, in trio with Bernardo Moreira and Alexandre Frazão, in which Laginha took original themes by Chopin and transformed them in his own language, and “Iridescente”, with Maria João, recorded at the Fundação Calouste Gulbenkian. By the end of 2013, Mário Laginha and his Novo Trio (New Trio), with guitarist Miguel Amaral and double bassist Bernardo Moreira, released a new record breaking new paths for jazz and Portuguese music.