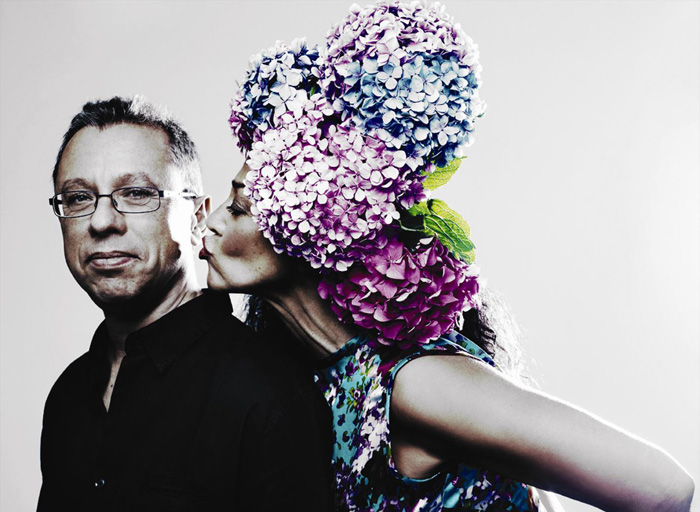 Maria João & Mário Laginha started working together 25 years ago, and since then they engage in a unique musical involvement, performing hundreds of concerts in Portugal and abroad. Together they already presented several records of excellent quality: “Danças”; “Fábula”. “Cor”; “Lobos, Raposas e Coiotes”; “Chorinho Feliz”; “Mumadji”; “Undercovers”, “Tralha”, “Chocolate” – a commemoration of the 25th years of their first work together and now their brand new “Iridescente”.

“Iridescente”, released in November 2012, shows, once again, the Duo’s enormous talent and creativity. Born of an invitation from the Gulbenkian Foundation to make part of the series ‘Songs of the World’, the music of “Iridescente” was created purposely for an unusual setting of voice, piano, accordion, harp and percussion. Maria João wrote all the lyrics and, for the first time, extended her creative capacity to composition – she’s the author of the theme “Iridescente”, – all the other themes and arrangements are from Mário Laginha.

Their breakthrough capacity transforms each record and every concert in a moment of creativity and emotion. The music that they produce is, first of all, the music that they like and want to do. When we hear it, we can identify the originality and the cultural influences of the countries where they have being playing.

Maria João has participated in the most prestigious Europe and World Jazz Festivals. Her career started at Lisbon’s Hot Club Jazz School, in 1982. One year later, she formed a quintet with Mário Laginha, Carlos Martins, António Ferro and Carlos Vieira. Together they recorded two albums – “Quinteto de Maria João” (1983) and “Cem Caminhos” (1985). At the time, she was already considered a true revelation in the jazz universe, having received several awards, namely from the San Sebastian Jazz Festival (Spain). In 1986, in one concert while touring Germany, Maria João had a special person in the audience: Japanese free-jazz pianist Aki Takase, who invited her to begin a duo project. From 1987 to 1990, singer and pianist astounded the audiences of Jazz Festivals all over Europe that surrendered to the freedom and irreverence of their music. In 1991, Maria João became involved in a new project with Portuguese group Cal Viva. This project marks her reunion with Mário Laginha. With the record “Sol”, a fusion of Portuguese traditional music with the sounds of jazz, they toured intensely all over Portugal.

The regularity of her work with Laginha and the musical complicity established between the two incited them to put together a new personal acoustic project. This is how the record “Danças” was born (1993), the beginning of a duo that persists until today. Besides her regular work with Mário Laginha, which has given them the possibility to work with very prestigious artists, Maria João has also worked with big names in Portugal (António Pinho Vargas, Carlos Bica) and abroad (Gilberto Gil, Joe Zawinul, Laureen Newton, Bob Stenson, Christof Lauer, Saxofour, Miroslav Vitous, David Friedman, Charlie Mariano, Aki Takase, Niels Henning Orsted Pederson, Hannover Philarmonic Orchestra, among many others).

In 2007, she released “João” a solo album including 14 songs from traditional Brazilian Songbook.

“Follow the songlines”, featuring Maria João, Mário Laginha, David Linx and Diedrick Wissels and the Orquestra Nacional do Porto was released in 2008 and was awarded the Victoire du Jazz award for artist or vocal formation. Still this year, Maria João and Mário Laginha were invited by the Frankfurt Radio Big Band to a series of concerts throughout Europe. In 2010, the duo recorded a CD with the big band.

In March 2011, Maria João released “Blackberry and Raspberry” with the Portuguese big band OJM. An album that features a series of historical North American standards such as “Skylark”, “Spring can really hang you up the most”. Besides these songs, the CD also brings fresh interpretations for themes that belong to Maria João´s inspiring and long career alongside the pianist Mário Laginha such as “Flor”, “Torrente”, representative Brazilian music themes, among others. Still in 2011, Maria João and David Linx, together with the Brussels Jazz Orchestra, record “A Different Porgy, Another Bess”, released in 2012.

On the album “Songs and Fugues” (2006), Mário Laginha shows how it is possible to establish a bridge between jazz and classical music: he uses, with virtuosity, classical techniques to compose six fugues, each one preceded by a song in the same key, following the scheme of preludes and fugues of Bach. His compositions have an inspiring contemporary sound, although complex.
For Mário Laginha, making music is essentially an act of sharing, and he has done so with strong musical personalities. His duet with Maria Joao has resulted in one of the most consistent and original projects of modern Portuguese music. Together, they have recorded eleven albums. Once again, here jazz acts as a foundation: there are influences ranging from: African, Brazilian, Indian, pop, rock, classical, and traditional Portuguese music. The duet has participated in some of the most important jazz festivals in the world: Montreaux Jazz Festival, North Sea Jazz Festival, San Sebastian Jazz Festival and the Montreal Jazz Festival.

Since the 80´s, he has played, also in duet, with classical pianist Pedro Burmester. Laginha takes his jazz roots and infuses them in a repertoire for the 20th century with: Maurice Ravel, Samuel Barber, Aaron Copland.

Laginha created the Mário Laginha Trio, with Bernardo Moreira on double bass, and drummer Alexandre Frazão. This formation is probably the closest to jazz, albeit with an unconventional style. Mario Laginha Trio recorded “Espaço” (2008) a kind of bridge between music and architecture and recently with “Mongrel” (2010), Mario brought Chopin to his musical universe.

Although he concluded his piano course at the National Conservatory with a perfect score, this did not hinder or solidify him as just a classical pianist. This gave him the tools to evolve as a composer and pianist in his own right, with his own personality and sound. This is what has allowed him to compose for such diverse formations as: The Hamburg Radio Band, The Lisbon Metropolitan Orchestra, The Hannover Philharmonic Orchestra, The Remix Ensemble, The Drumming Percussion Group, and the Oporto National Orchestra. He has also contributed with compositions for theatre and cinema.