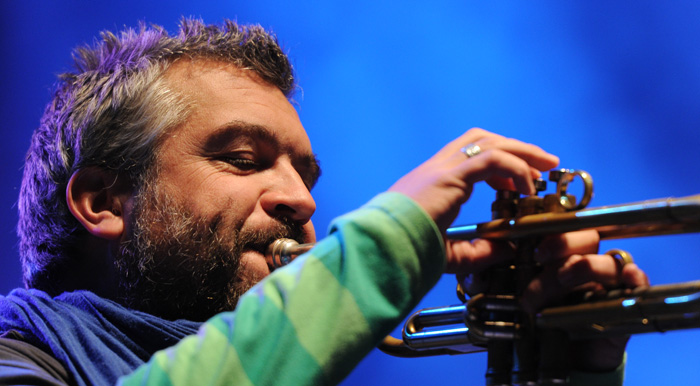 Marcus Wyatt is a trumpet player/composer from Port Elizabeth in the Eastern Cape has been playing his horn since 1983. He is part of a new generation of South African musicians – respectful of the past, yet moving forward without fear of twisting boundaries.

This South African musician has performed around the globe, and worked with an impressive array of musicians, from Manu Dibango, Abdullah Ibrahim and Miriam Makeba to Maria Schneider, John Faddis, Bheki Mseleku, Lionel Loueke and Steve Turre. Wyatt is an 10-time SAMA nominee, and has appeared on festivals and in venues in South Africa, Mozambique, Angola, Swaziland, Zimbabwe, Lesotho, Holland, Italy, Sweden, CzechRepublic, Poland, Norway, Switzerland, France, Belgium, Germany, Austria, Malaysia, Taiwan, Bolivia and India. He has recently returned from touring in Australia and Belgium, and has just released his seventh solo album “One Night in the Sun” , a live recording of a big band concert at M1 Studio , SABC (Johannesburg). Marcus also leads ‘The Blue Notes Tribute Orkestra’ , which pays homage to the music of legendary South African Jazz group The Blue Notes . He has also recently started the amazing 12 piece Afrobalkan ensemble ‘Bombshelter Beast’ – watch this space!

“Marcus is able to entertain a very fruitful conversation between a clearly South African jazz tradition, and a more international resonance, displaying his musical know-how at times in the image of Freddie Hubbard with a nod here and there to the Jazz legend Miles Davis himself. Over the years he has developed a reputation of being one of the most versatile and in demand trumpet players in South Africa. Not only is he one of the hardest working musicians, but is also an obvious and rarely gifted trumpet player. He is equally at home in any number of settings from small ensembles, trios and big bands to drum n bass, hip hop, R&B and house and round the corner to free improvisation. This combined with a warm, wide sound, has earned him the respect of both his fellow musicians and critics alike.”

As Soloist or sideman:

“Marcus Wyatt is a shining star in the sky of contemporary South African Jazz. Aware of the important legacy upon which he adds his fresh melodies, he nonetheless strives towards the definition of a novel sound, one which is consciously abandoning characteristically South African patterns, opening up for creativity beyond the accepted norms. His sound is subtle yet steamy, and the freshness and honesty of his lyrical approach is one of the reasons why this country can boast about a certain vitality in their jazz scene.”
Henri M Yere – North Sea Jazz Festival (Cape Town)

“Represent recommends “MARCUS WYATT” because we rate him as one of our BEST musicians in the country, his music is INCREDIBLE and we LOVE what he does. The musicians he will be performing with at the launch are all equally as MAESTRO! Don’t miss this JAZZ peeps.”
Represent.co.za
“The club hosts a rare appearance by trumpeter Marcus Wyatt’s iconoclastic jazz group, Language 12. There’s a sense in which its appearances are always protest concerts: protests against the complacency, predictability and blandness of much of the country’s alleged jazz. Yet although Language 12 sometimes ask their audiences to travel with them down some chancy roads, and contemplate some steep precipices, neither musicality nor enjoyment are ever sacrificed.This is genuinely exciting music: fresh riffs on ideas rooted deep in both world and South African jazz traditions.”

Gwen Ansell – Business Day
“You immediately realise where Wyatt is speaking from: the heart, the head and yes, the ‘hip’.”

24.com
“Moving with liquid ease between trip hop, R&B, standard jazz, bossa nova and Brazilian-enriched Latin hybrids, South African-born trumpet emissary, Marcus Wyatt, guides the way with his remarkably adaptable style and tone that can be as agile and fine as a flute and robust as a tuba. The fact that he appears equally at home within standard and contemporary styles, always having an artistic statement to offer, always breathing life into whatever form he enters, has earned Wyatt an enviable reputation among audiences and critics”

CD Baby.com
“What I know about jazz is dangerous, but I can recognise sheer technical and passionate virtuosity when I see it, and there was plenty of that on stage last night. I wouldn’t even actually call what Marcus has recorded here Jazz really… it’s a kind of mesmeric, live world music, but even that is casting long shadows that I don’t like. It’s mystical, moving, highly technical but deeply passionate music that moves through jazz, blues, afro pop and more.Displaying the kind of at-home, comfortable stage presence that’s a clear result of his international work and the sheer volume of his workload, Marcus was a funny, if not voluble front man. Content to let his music speak for itself, that is precisely what he did. Absolutely amazing.”