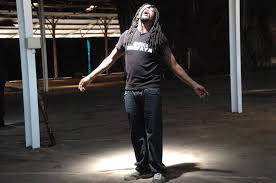 Kgafela oa Magogodi was born on December 7, 1968. He is a Kwai-Jazz poet, Spoken Word Theatre Director, film scholar and academic based in the Wits School of Dramatic Arts where he is a part-time lecturer in African Cinema and Oral Performance and Rap/Dub Poetry Studies. Magogodi has presented his work worldwide and remains a prolific producer of poems, short stories, audio recordings and live shows. His poems have been published in Poetry International, Laugh it Off, New Coin, Upbeat Magazine, Homeless Talk and the Journal of African Literature.

Kgafela oa Magogodi is a free voice whose experimental work with stand-up poetry, spoken word theatre and essay writing has travelled widely. Working comfortably in both Setswana and English, his writings are often spliced in with sprinkles of urban colloquialisms.
Following his spoken word and music album Bua Fela, Magogodi is currently working on new tracks with Kgafela le Marabele, a music troupe which has been interpreting his sound on stages around the country. In an album titled Marabele Republic, the band seeks to presents a conversation between word-bending and musical experimentation.