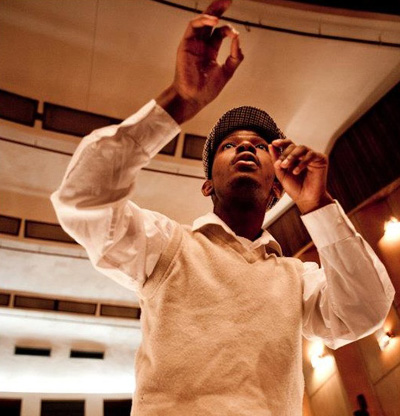 I was raised in Soweto, Johannesburg and am a young vibrant graduate of music composition from the University of Cape Town. I am currently writing and performing my music with my band, The Tune and Recreation Committee (TRC), my brass band, the Native Groove Collective (NGC), and the newly established Amandla Freedom Ensemble based in Johannesburg . Besides being a bandleader and composer I perform regularly as a freelance musician in various capacities. As well as leading the TRC I have been active in numerous other projects in Norway, Sweden, Germany, Israel, Britain and Botswana where I performed a wide variety of music ranging from Classical, Jazz, Pop, Balkan and Indigenous African Music. I have performed with many celebrated musicians including Barney Rachabane, Marcus Wyatt, John Davies, Hugh Masekela, Sipho Hotstix Mabuse, Susana Baca (Peru), Mark Fransman, Louis Moholo , Dizu Plaatjies, Khaya Mahlangu just to name a few. I am a strong believer in giving back to the community; this is why I have chosen to in my student days, voluntarily, teach music at the Mannenberg High School as well as Alex Sinton High School.

In 2006, I was selected as part of the Standard Bank National Youth Jazz Band which toured South Africa and Sweden and performed at several Jazz festivals including The Cape Town Jazz Festival, Johannesburg Joy of Jazz Festival and the Grahamstown National Arts Festival. I performed regularly with the Cape Town Jazz Orchestra, UCT Big Band, Morrera Chonguica, Hilton Schilder. In 2007/2008 I participated in an exchange program in Oslo at the Nowergian Music Academy. , toured Europe with a Balkan Rock band Under Dogs International (UDI). In 2009, I Toured Germany with the MIAGI Youth Orchestra. I had a successful tour in the UK and Israel with SA’s leading Opera company (Cape Town Opera), and I have composed music for the Cape Town Ghoema Orchestra.

I am the founder and curator of a concert series in Cape Town called the Afrikan Freedom Principle which has hosted and collaborated with a list of South African luminaries such as Tebogo Louis Moholo Moholo, Dizu Plaatjies, Andile Yenana and Errol Dyers with my Cape Town based initiatives such as the TRC and the NGC.
September 2013/ April 2014 The Native Groove Collective a brass band dedicated to the performance of South African popular works held an eight month residency as part of the Cape Town City All Sessions.

I am currently embarking on a multitude of project designed to showcase my original music and still collaborate with many of South Africa’s celebrated musicians. I am an adept musician in many styles of music and believe I can contribute immensely to the music scene in South Africa and beyond. I envisage my music integrated into the very fabric of contemporary music culture.