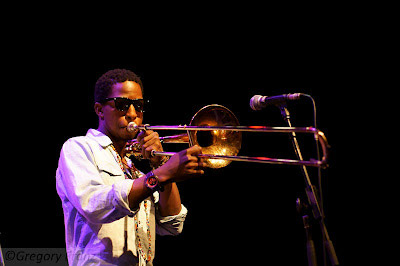 Though 32 year old Malcolm Xogile Jiyane has been dubbed the future Jonas Gwangwa by his mentor, Daveyton jazz legend Bra Johny Mekoa, tromobone master at the Music Academy of Gauteng still sees himself as the boy next door.

Born in Katlehong in 1982, Jiyane’s upbringing was not a healthy one. He ran away and from home and made the street his home after “abuse” by his father.

Malcolm says he is a born performer but did not know about his hidden talents until his mentor Bra Johny went to the Benoni Kids Haven to perform for the street kids . “Something in me was touched by his melodies and I knew there was a musician in me.” This was just when Bra Johny was recruiting street kids and other disadvantaged youth to join the jazz music school he founded. Malcolm, who dropped out of school at grade 5, joined Bra Johny’s Academy in 1997 at 13, and started as a drummer. He also played the piano and eventually the trombone, which he had a special connection with.

“Music has changed my life. I feel complete when I am doing this and I believe this is what God wanted me to do . It saved me from crime and drugs on the streets. It’s my life.”, he says. His playing is very intense and it says a lot about his life journey. He preaches the ‘One Love Movement’.

Malcolm has performed all over the world, including Germany, Sweden, Holland and the US. “This boy is the future Jonas Gwangwa,” said Bra Johny in an interview in 2005, and he’s well on his way.

Malcolm loves to collaborate and has since formed a trio and called it the Malcolm Jiyane Tree’o, which is never limited to an ensemble of 3. It consists of himself on Piano and Trombone, Senzo Nxumalo on bass (electric and acoustic) and Kgori Magatla on drums. He is also part of two other bands called ‘Future History’ and ‘Plantation Miners’. He featured in Tumi Mogorosi’s Project Elo and he has played with the great Nduduzo Makhathini, Herbie Tsoali, Feya Faku and many other greats.