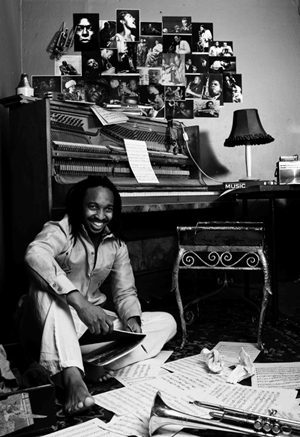 For the first time in Johannesburg, the 2012, three time South African Music Award nominated project, Lwanda Gogwana’s Songbook Chapter 1 will perform music from its debut album and previewing concepts and compositions for Chapter 2. This performance is specifically called Songbook Chapter 1.5 to signify the journey from Chapter 1 to Chapter 2. The Lwanda Gogwana Chapter 1 CDs will be on sale on the night or visit iTunes to download instantly.
www.lwanda.co.za

South African born jazz trumpeter and composer, Lwanda Gogwana is a 3 time 2012 South African Music Award nominee for Best jazz, Best Newcomer and Male artist of the year. He was born in the Eastern Cape Province of South Africa. The trumpet player bases his composing style on his Xhosa cultural roots.

Gogwana graduated with a Bachelor of Music degree majoring in Composition and Arrangement from the University of Cape Town (UCT) under Prof Peter Klatzow and Prof Mike Campbell, and received scholarship to study in Norway, Europe on exchange at the Norges Musikkhogskole based at the University of Oslo. He holds an Honours degree in African Musicology under the mentorship of Dr Sylvia Bruinders.

Gogwana has been actively involved in community building projects, including teaching and conducting workshops in and around South Africa. He was also part of a youth run organization, RYTHM (reaching youth through music) that aimed at promoting South African music to the youth. Gogwana has continuously conducted workshops for the South African Association for Jazz Education (SAJE) conference and for the City of Cape Town Arts and Culture Department youth development projects.