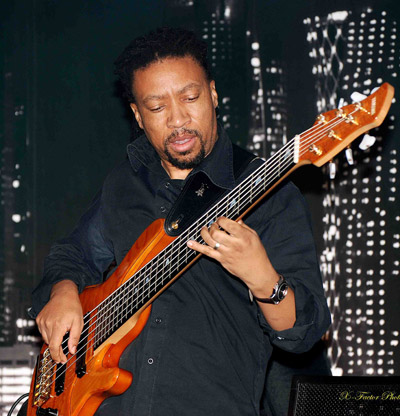 Born in 1972 in the North West Province, Mafikeng, Lucas Senyatso enrolled with Mmabana Mmabatho in 1986 for bass guitar lessons. In 1988 he was already playing jazz music professionally. In 1990 he joined a local band which comprised of his teachers. He joined the band replacing his former teacher as a permanent bassist. In 1998 he got a call from the legendary Hugh Masekela to join his band on a permanent basis.

In a space of three weeks after joining Hugh Masekela’s band, the USA tour begun. This saw Lucas travelling to places like New York, Boston, Seattle, Wahington D.C, New Jersey, Long Island, Chicago, Dallas Texas and many parts of the USA. Other countries like Germany, Denmark, Finland, France, UK ( London, Leeds ), Jamaica, Japan and so forth followed. As Lucas was travelling all over the world, he was sharing the stage with the likes of Stevie Wonder, Take Six, Maze, Herbie Hancock and many other great musicians.

Lucas Senyatso is a also a recording artist with an album that was nominated twice for the SAMA’s. As an accomplished song writer, producer, bassist, musical director, Lucas Senyatso has decided to go back home after spending 15 yearsin Johannesburg, to give back to his community by teaching bass guitar. In 1995 he graduated with a degree in Communication. He is currently teaching bass guitar and also doing grade 7 theory of music through London Trinity College. He is looking at getting a B Mus in the near future.

A second album is also on the way.

Lucas Senyatso is definitely one of the top Jazz musicians and a hard working musician.