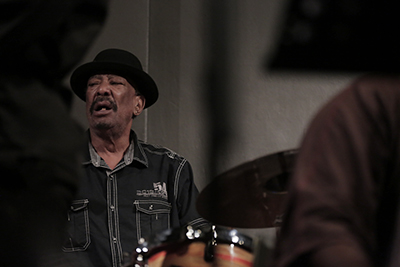 Born in Cape Town, Louis Moholo-Moholo formed The Blue Notes with Chris McGregor, Johnny Dyani, Nikele Moyake, Mongezi Feza and Dudu Pukwana, and emigrated to Europe with them in 1964, eventually settling in London, where he formed part of a South African exile community that made an important contribution to British jazz.

He was a member of the Brotherhood of Breath, a big band comprising several South African exiles and leading musicians of the British free jazz scene in the 1970s and is the founder of Viva la Black and The Dedication Orchestra.  His first album under his own name, Spirits Rejoice on Ogun Records, is considered a classic example of the combination of British and South African players. In the early 1970s, Moholo was also a member of the afro-rock band Assagai.