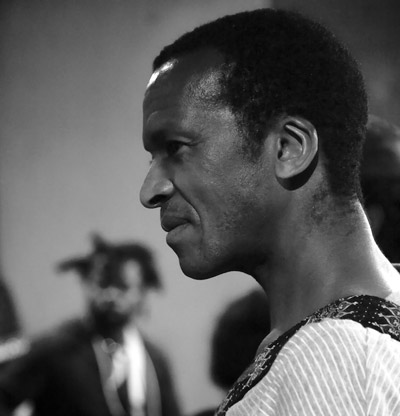 Louis is respected as one of the greatest African Jazz guitarists of our time. He has performed on the world’s best stages (Carnegie Hall, Brazil, France, Spain to name but a few) and impresses audiences from all walks and cultures of life with his intuitive and inspiring use of his instrument, the guitar.
Grammy Award winning producer, Mark Johnson, is quoted as saying “Louis has a stellar reputation … one of the most exciting and electrifying performers to come along in years” and flyglobalmusic.com reviews his CD World traveller, as “A near faultless album and a creative statement of Pan
– African vision”.
Of his solo performance at the 2010 National Arts Festival in Grahamstown, Contributing Editor, Fiona Gordon of the Cue says “Known particularly for his mastery of his strings, his use of voice is akin to his skill on guitar.” She further explains “His audience sits breathlessly still, mesmerised, aside from one or two who can’t stop tapping out a rhythm with one or other part of their bodies.”
Louis’ ongoing performance since 2007 with the American based Playing for Change Band, which consist of musicians from the African continent to the Netherlands to North America, sees him perform his special guitar wizardry across all States of North America.
You know that Louis Mhlanga the artist is a legend in the musical fraternity now that a host of young guitarists have started to emulate his distinct style of picking and plucking the guitar, what Louis calls the African guitar.
But Louis is best known for his humility, and his guiding motto is respect, for the world and all her people.
Louis is globally respected and acknowledged as the master of the African guitar. His style of music captures the voice of our continent.