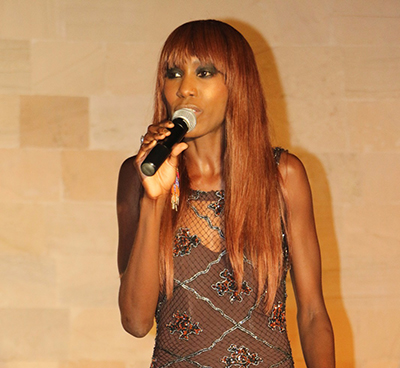 There are few Africans whose creative journey has been as wide-ranging, singular and successful as the one traveled by Liz Ogumbo.

Over the past decade, this formidably focused Kenyan has established herself as a creative entrepreneur whose work in music, fashion, television, radio and, more lately, food and wine shares an enviable commitment to excellence – and to fostering relationships and projects that advance the African creative industries.

Whether it’s writing, recording and performing her original music, designing for her eponymous fashion label, hosting and producing Fashion Lab Africa TV and radio or starting new creative initiatives like #LSHW Lipstick Skirts Heels & Wine, Liz is unquestionably the new face of modern Africa – as much rooted in the continent she loves,as the global community that is fast embracing her irresistible vision.

In conveying her creative output, Liz came up with a new, all-encompassing term – KenSoul. “KenSoul represents my Kenyan soul that allows me to stylishly weave stories of my Kenyan origin and global influences into the KenSoul experience,” she says of this description that’s as original as the person behind it.

KenSoul is also the title of Liz’s first album, released to acclaim in 2010 – and is the reference point for her recently released a follow-up, KenSoul, The Lotus Chapter. Traversing multiple musical influences and expressed in Luo, Swahili, English, and French (all of which Liz speaks fluently), Liz’s two albums reflect her genre-agnostic sound, her Kenyan soul and her life experiences. Her humorous writing and skilled storytelling, combined with her smoky, sultry vocal abilities and mature yet playful sound, mark out Liz as one of Africa’s most notable artists.

It’s no surprise to discover why Liz’s attachment to her roots, visibly threaded through everything she does, is far more than simply lip service.

“I come from a tribe called the Luo, which is one of 42 tribes in Kenya and is rooted in the western part of Kenya, by Lake Victoria,” she explains. “The Luo culture is very rich. One thing all Kenyans know about the Luo community is that we love music, we love to dance and we are larger than life. Because we live near the lake, we love to eat fresh fish that is put on our table by the most skilled fishermen in the country. Music and dance is a part of our DNA.”

Although Liz grew up in the Kenyan capital of Nairobi, at least four times a year her parents would take their children home to their villages, most frequently her Dad’s home village situated in Seme Kowe near Kombewa in Kisumu county. There, Liz and her siblings would experience the richness of village life and the beauty of the surroundings, which include Kit Mikayi, a stunningly unusual stone formation in Kisumu County that draws visitors from all over the world.

There’s something else too: Liz is named after? her great-great grandmother Elizabeth Loye, a talented singer and performer who was born around the 1860s and lived until the 1940s. There’s a very real sense that Liz carries the spirit of this powerful musical and creative lineage in her contemporary work. “It’s crazy because I don’t even know what she looks like but everyone says that I remind them of her, musically and creatively. She was a pioneer and a very strong woman and I love knowing that there’s something of Elizabeth in me.”

“We see a lot of the late Elizabeth in Liz,” confirms her father, Fred Ogumbo. “She is very creative and courageous and whatever she puts her hands to always works well.” It was from her father that Liz learned Luo songs, giving her a foundation based on her roots, culture and heritage, while the Christian songs taught to her by her mother, Jane Esther Ogumbo, helped instil the lifestyle and values that Liz lives by.

Both of Liz’s albums feature songs from her childhood and traditional melodies – among them “Maro Pamore” off her 2010 debut KenSoul. I love the melodies of that song and what it stands for,” says Liz of the recording (which features a guest vocal from Zambian-raised rapper, Zubz).

KenSoul, The Lotus Chapter maintains the mix of genres that have influenced Liz (soul, hip hop, reggae, jazz, and blues) as well as the roots influence of the likes of Taraab music on songs like “Oringo Bayoyo” and “Msenangu”. As Liz puts it, “When I sing in my vernacular I know what I’m singing about”. “How do you identify yourself in this global world if you don’t have the fundamental foundation when it comes to language and culture?” she asks.

Another influence on Liz’s creativity and music, in particular, is Chakacha – a Swahili cultural dance that Liz learnt growing up in Kenya and which she describes as “the most sensual dance I know of beyond my geographical boundaries”. Those who’ve seen Liz perform live have witnessed how she weaves Chakacha into her live show, adding another layer to what is one of the most uplifting, near-spiritual and joyous performances in contemporary African music. A standout feature of Liz’s energetic live shows is the visual element which makes full use of her unique fashion sense. The latter takes expression in the style of consultancy and designs that she creates under her own label, from her showroom boutique in Johannesburg.