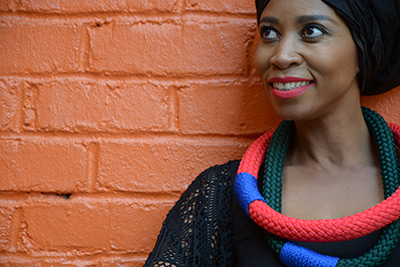 Lindiwe Maxolo is an emerging powerful vocalist in the South African Jazz music industry. She is recipient winner of the 2002 Afro Vocal Category in the Old Mutual Jazz Encounters Competition. Armed with a Cum Laude in Jazz Honours Degree from the University of Cape Town, she’s demonstrated her diversity by performing in India, Portugal, Greece and New Orleans. And her enchanting magical voice will still see her further mesmerize the world.
With a background that was rooted in church music, Ms Maxolo felt the need to take her musicianship to a higher level by studying music formally. She went on to graduate Cum Laude in her Honours Degree in Jazz Music from the University of Cape Town.
Critics have described her sound as “jazzy”, “soulful”, “lyrical”, “affirming” and “layered”.
According to Lindiwe, her sound is an Acoustic experience that incorporates both African Jazz and Traditional Jazz influences. Lindiwe has been involved with many different styles of music but her main focus remains with Jazz music. Lindiwe Maxolo was born and bred in the then Vaal Triangle.
Lindiwe Maxolo has, for some years now, been working very hard towards establishing herself as a force to be reckoned with in the music industry. This is beginning to bear fruit when you look at some of the stages that she has already graced within South Africa and Internationally. She was invited to share the stage with the Legendary Dave Grusin and Lee Ritenour. She has worked with some of the top South African musicians such as Sibongile Khumalo, Concord Nkabinde, McCoy Mrubata, Gloria Bosman, Feya Faku, Andile Yenana, to name but a few.
Internationally she has performed on a number of prestigious platforms: In 2004, together with Award winning Mark Fransman, Lindiwe was part of the Department of Arts and Culture’s South African Cultural representatives at the Athens Olympics in Greece.In 2006 she was invited to perform as part of the New Orleans – South African Connection, a cultural exchange dedicated to the victims of Hurricane Katrina. In 2008 Maxolo was invited as Guest with Organic Lounge to perform at the Opening of Habtoor Hotel’s Horizon Lounge in Dubai. In 2009 she was Guest to The Honorable South African Ambassador to Portugal, Ms Thandiwe January Mclean in Lisbon, in an event to celebrate South Africa. In 2013 Lindiwe performed in India at the 3rd Delhi International ICCR Jazz Festival 2013. Lindiwe has just returned from New York City attending a CMJ Music Marathon 2015. Since the release of her debut CD, Lindiwe Maxolo has become one of the new young South African Jazz voices that are writing a new history and taking South African music to greater heights.
“TIME” is Lindiwe Maxolo debut solo Jazz album produced by Nduduzo Makhathini. The album was released in October 2012 and has been nominated at the South African Music Awards 2013 (SAMA19) in Best Jazz Album category, and nominated for the Wawela Music Awards 2014 as Best Creative Album of the Year. Her music on this album fuses World and African sounds; lyrically it explores diverse spiritual, love and commentary on African subject matters. She is described by many music critics as a petit lady with a big uniquely amazing voice.
TIME is smooth, layered and meditative in its overall offering. All 13 tracks have an individual definitive persona to them that adds to the collective feel of the album. It is an easy listen to the ear piece music artistry that allows the listener to travel musically in their mind.

Lindiwe is also featured as part of Joburg’s top Corporate Jazz Outfit – Chilli&Lime. As an Educator Lindiwe has conducted workshops at the (O)prah Winfrey Leadership Academy for Girls. She is a Music Educator at the Thaba Jabula Secondary School in Soweto.