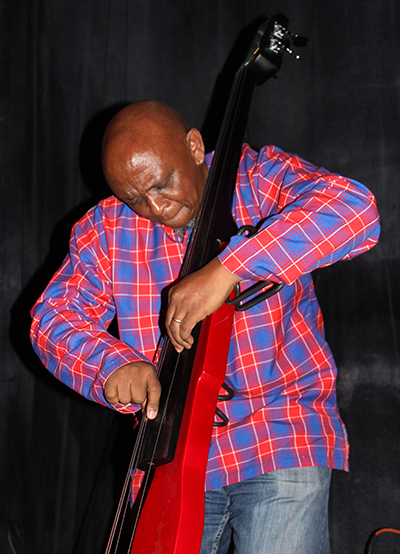 Lex Futshane a prolific composer, arranger, educator, performer and an internationally proclaimed bassist (electric and acoustic), spent many years in Durban performing, arranging music and lecturing in the music departments at the University of KwaZulu Natal and DIT (Natal Technikon), he is also a graduate of the former. Lex conducted workshops in 1993 at the Grahamstown South African schools jazz festival. He played bass and co-arranged on many recordings such as“Art Gecko” – Counterculture, “Durban Noise” – Jurgen Braunninger, “African Tributes- NU Jazz Connection, “Old Blue Balls Is Back”- Felema, “Before it’s too late”- Darius Brubeck to name just a few.

Lex is a founder member, composer and arranger of “Bassment” a 12 double bass ensemble comprising of 6 Jazz and 6 Classical bassists, a first in Africa. Currently, Lex teaches bass and manages a teacher training programme at the Johannesburg Youth Orchestra Company. Lex has just finished a very successful tour of Kwa Zulu Natal where he performed at numerous venues and gave music workshops in major cities as well as in rural areas. Lex has an exciting ensemble that plays his compositions and arrangements of local and international jazz standards. The band has just released an album of Lex’s compositions titled Innocent Victims and Perpetrators. Lex is a founder member of Ingqungqthela, a collaboration with McCoy Mrubata that is tasked with taking Jazz to the peoples’ back yards e.g. Jazz in the Garden at Lex’s house; Jazz on the Court at McCoy’s house and Jazz for Bra D at advocate Dumisa Ntsebeza’s house.

He has toured and performed extensively around the world such as in Swaziland, Zambia, Maputo, USA, Cuba, Korea, UK, Germany to name a few. He is a leader of the band that is very active in providing music for the corporate events inside and outside the country: launch of iBurst, Telkom tower in Tshwane, Cell C, BMW, Linde, Climate Leadership Awards, Telkom launch in Zambia & Sizwe Medical Fund and numerous others. The band comes in different sizes from a duo to a small big band depending on the client’s budget.