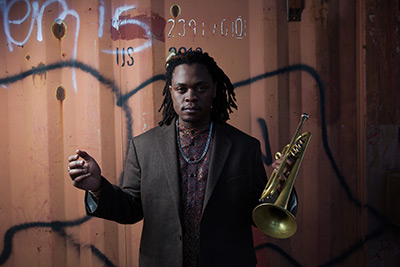 Lesedi Ntsane is a South African born Trumpet player who was introduced to the cornet whilst at the Salvation Army Church, where he later learned to play. Born into a musical family, with a singing Mother and a Father who had spent some time with Trumpet. His Grandfather was the Director of one South Africa’s classic Musical unit, The Merrymaker’s Orchestra.

He then joined an amazing South African outfit, 4 seasons that was based in Tshwane, leading a number of their festivals and community outreach whilst holding the music banner high up.

He had the pleasure of working with great musicians and bands such as the Phatt Brass Big Band led by John Davies, The New Cool ensemble lead by Dan Selsick. He also did various sideman appearances with various groups and various genres.

He had the privilege of working with bands like the Violent Femmes (2007) and in 2009 he had the honor of playing lead trumpet for O’jays Sunshine Tour in South Africa.

He Graduated from Tshwane University of Technology with a Diploma in Music in 2010.

In 2011 He moved to New York City to further his studies at the prestigious New School for Jazz and Contemporary Music where he had the privilege of private tutelage of Billy Harper, Jimmy Owens, Charles Tolliver, Cecil Bridgewater, Marcus Printup, Andrew Cyrille, Gerald D’angelo, etc

He has performed in various venues such as the Museum of Modern Arts with Masauko Chipembere of black Sunshine, The Brooklyn Museum with Zozo Afro Beat, The Shrine with Tamara Davidson, Ngoziy’lsee, Something Jazz Club with the John Foster Brooks Big Band, Joe’s Pub with Nomsa Mazwai, Osekre and the Lucky Bastards, The New School Afro Cuban Orchestra lead by Bobby Sinabria, Majesty and The New Vibrations around Brooklyn and the Lower East Side and the Bernard Linnette Quintet.

He has also done some amazing film-scoring projects with L.A based composer, Bo Jacobson and some projects for Lalela Library Music.

For the past two years he has been working at Jazz at Lincoln Center as part of the Webop Educational programe and has had the pleasure of working with Riza Printup, Dr. Patrice Turner, Adam Platt, Anthony Lee, Vanessa Cruz, Tim Sullivan, Julian Smith, Harlem children Zone and Washington Heights Head Start programme.

He has represented the New School for Jazz as part of a Jazz Combo called “The New School swingers” which did a live Radio Broadcast at WBGO radio Station In New Jersey.

Later he was given dates as a leader with initially a trio to play at Union Square Park featuring Francesco Alessi and Alexander Claffy and later a quartet for the Schools welcoming Party and various private events.

He Recently graduated at the New School for Jazz and Contemporary Music with a Bachelors of Fine Arts and has continued to take on various projects whilst working on the release of his projects and full establishing his own Production Company, Phatt Chops Productions.