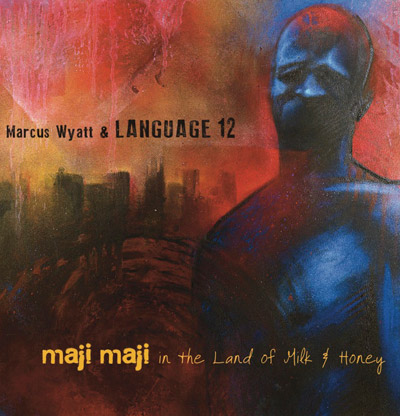 ‘Live, straight from the moon and other planets’….. Maji Maji, an inner and outer stellar journey armed with music as both the weapon and the cure

Marcus Wyatt’s music collective Language 12 return with their second album Maji Maji, the product of a collective of musical nomads whose crates of vinyl would clearly be worth years of digging in, such is the astonishing range of influences.
Genre-defying can sound like cold fusion but Maji is no lab project. This is a deeply spiritual and unfettered record that doesn’t so much break boundaries as bend dimensions. Language 12 move with complete freedom, sometimes with stealth, sometimes raw power but always with relentless invention.
A dextrous signature emerges as the cosmic jazz, funk, fusion and West African influences of trumpeter Marcus Wyatt, vocalist Siya Makuzeni and bassist Prince Bulo spill over glitched hip hop and rolling Drum & Bass breaks from drummer Justin Badenhorst.
As an album of live un-cut takes and few over-dubs, the jam ignites deft arrangements with each listen revealing layers and details, but the greatest achievement is how quickly you forget the sign-posts and give in to the journey. There’s little option. Maji is a gonzo dose of pure magic realism, 72 mins in the company of some kind of bi-polar, schizophrenic, super musical oneness: heroine, hero and anti-both, all at once.
Elemental forces collide at the heart of this deep piece of work. We’re pulled by gravitational emotions through a heavy rotation of dark, crushing grief, heart-bursting joy and all colours in between. Maji is at turns intimate and symphonic, playful and brutal.
Opener ‘Show You’ cuts from a Makuzeni syncopated scat over a stripped Badenhorst beat, to the bonkers SeSotho rhyming of MC Gwaza Juse before building to a soaring, aching, chorused vocal mantra: ‘life’s trials burden on relentless, why we must embrace our love dear’
‘That Day She Left’ is subterranean the labyrinthine darkness pierced only occasionally by the Makuzeni line, ‘I feel the sun on my face, I open up and meet myself again’, but Sossusvlei lifts the weight, a hazy, blissful joy, hot vocal over lush, warm keys played in slow burning desert time.
‘Storytime’ strolls to Romy Brauteseth’s upright bass, rounded trumpet vowels and Makuzeni’s narration before dropping hard into a D&B roll and a vocal flex of spitting Xhosa ragga. ‘Dance of the Painted Faces’ courses with Sun Ra power, riding on Badenhorst’s pounding cymbal breaks, rising to a raw crescendo of Wyatt’s synthed-out trumpet and Mhlanga’s raging fusion guitar.
Exploring such a constellation of far flung influences works because of Language 12’s dynamic collectivism: arrangements do not indulge the soloist but together play out the collision of ideas and the arc of their extrapolation. Maji is musically hyper-conscientised yet spontaneous, allowing for the sometimes effortless, sometimes tense alchemical transformation of base styles that might otherwise remain just fragments.
It’s also properly daft in places. The unhinged Parliament-style MC Gwaza Juse (Nicholas Welch) clearly didn’t send his messages from any fixed cosmic address, hailing us on the break-powered, Afro Futurist carnival of the title track, ‘live, straight from the moon and other planets’.
Whilst there’s definitely a charting of far off musical territory, Maji’s innate humanity and humour remain ever present. Language 12 clearly vibe off each other, serving up moments of outstanding virtuosity through a collectivism that makes the seemingly impossible possible.
The thread running through-out is an extraordinary, telepathic synchronicity between Wyatt’s fluid trumpet vowels and Makuzeni’s sheer range as intertwining melodic lines run together, unravel and re-combine.
Elsewhere Badenhorst, pounding rhythmic engine / delicate urger, pushes and cuts beats on Jagged with the dexterity of the turntablist loosening and tightening time. The spare keys of pianist Melissa Van der Spuy on Blues for Johnny build in to broken cascades on That Day… whilst Prince Bulo anchors through-out with understated dub, Mbaqanga and Afro jazz.
Mlhanga’s measured arpeggio funk and Van der Spuy’s rolling piano drive For the Giants of Motherland West, while Wyatt and Makuzeni’s note plays roll, collide, atomise melodies then soar again.
Maji Maji, the weapon and the cure. The product of restless lives lived roaming the inner and outer musical galaxies in search of new sonic horizons.