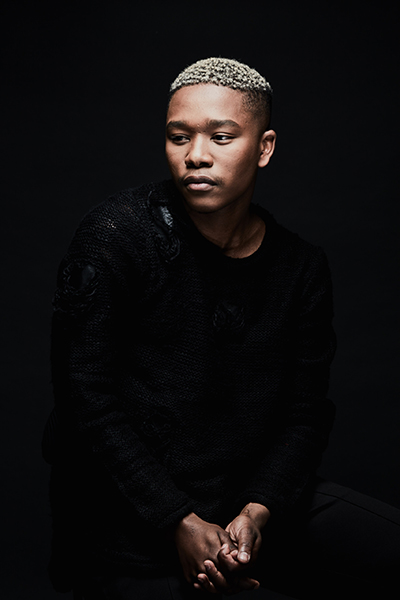 Langa Mavuso is a 23-year-old musician who is passionate and driven by music and performance. He has actively invested in honing and mastering his craft. Langa began his art education in high school at the National School of the Arts in Johannesburg where he studied Dramatic arts for 3 years and Contemporary music for his final 2 years at the school.

He went on to study a BA at Rhodes University for a year he where took the initiative to get formal classical singing training to refine his technique and vocal health. In 2013 he enrolled at the University of Cape Towns’ South African College of Music to study Jazz Performance under the guidance of renowned artist and vocal teacher Amanda Tiffin.

Langa has performed extensively in South Africa in various events, corporates and festivals. He appeared at the Red Bull Brickfields Music Festival 2012 with popular international artist Spoek Mathambo on whose album he currently appears. He was also part of a contemporary music collective known as Soul Sessionz with which he performed extensively for corporate events such the State of Nation Address Gala Dinner 2015, Govan Mbeki Awards 2015 and many other corporate and intimate jazz events around Cape Town.

Langa released his debut EP in the spring of 2016 and has since been performing at many events in Johannesburg such as Fridays, Starbucks Sessions and most recently #ToyotaLive with The Soil. Langa recently released another EP under Redbull Studios and is now signing under Soulistic Records where he has already collaborated with Black Coffee for his up coming album.

Langa is said to be the artist to watch in 2017 by unlabeled magazine as well as Elle Magazine. Langa is a versatile artist who has performed in various genres such as Musical Theatre, Classical Ensembles and was even part of the Fifa World Cup 2010 opening ceremony as part of the dance ensemble. While he is extremely versatile he maintains a strong grounding in Soul and RnB music. He is molding a new sound era of urban soul in South Africa. Combing electronic hip hop beats with acoustic jazz and soul inspired vocals.