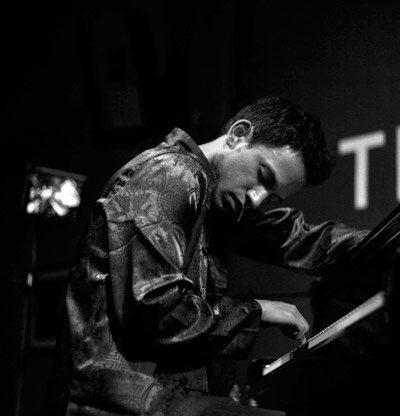 “There’s a palpable connectedness they share as players, a connection that also touches attuned audiences at their live performances too. This band is on a search for more than beautiful notes. They are asking more of the music. Its corporeal and ethereal aspects are invoked into the simultaneous sound ritual. Each performance takes on the nature of a meditation and as Zim Ngqawana said, ‘the music must lead us towards ourselves’.”

A Kyle Shepherd Trio performance is so much more than just a concert; it’s an all-sensory experience.

Featuring Shepherd on piano, Shane Cooper on double bass and Jonno Sweetman on drums, this magnificent trio has enthralled audiences across South Africa, Switzerland and China.

VIDEO: THE KYLE SHEPHERD TRIO “FLYING WITHOUT LEAVING THE GROUND”

The music you hear will be drawn from The 2014 Standard Bank Young Artist of the Year, Kyle Shepherd’s repertoire of both recorded and unreleased original compositions.

In her review of the trio’s Dream State double album in 2014, revered Jazz music journalist, author and historian, Gwen Ansell, wrote: “Repeat listening to the same material on record underlines what a distinctive voice Shepherd now has. Those fragments of musical home that have always characterised his compositions and playing are still there; the reworkings, though, are often unexpected and subtle, emerging from a modern and personal pianism that
isn’t in anybody’s shadow.

Band leader and composer, Kyle Shepherd, one of South Africa’s leading progressive pianists and composers of his generation, is fast gaining international recognition for his distinctive compositional style and performances.

The 2014 Standard Bank Young Artist of the Year Award winner for Jazz already has a well-established record of celebrated performances in South Africa, Europe, Asia and the USA.

The twenty-seven-year-old virtuoso pianist has already released five (5) critically acclaimed albums in his young career. In 2014, he released two (2) albums, namely Dream State, a 21-track double album of his Trio which has received nominations for both the 2015 South African Music Award [SAMA] and a 2015 Metro FM Music Award in the Jazz Category, as well as his debut solo piano offering Into Darkness, recorded in Japan, which was launched with a tour in the South-East Asian country in 2014 that included a performance at the prestigious Tokyo Jazz Festival. Previous releases include fineART, A Portrait of Home & South African History !X, all of which also earned SAMA nominations.

As a pianist, Xaru player (traditional mouth-bow) and composer, Shepherd has forged a unique compositional and performance concept that pays homage to all his musical influences and the many great musicians he has worked with, all while continuing to look forward musically in a way, which, in the words of the great South African Jazz writer and historian, Gwen Ansell, “live in the jazz world but are never imprisoned by it”.

“…music of subtle yet tremendous power… it is music of genuine passion, meditative and stately but always emotionally engaged.” MarcusO’Dair | The Arts Desk, UK

“… it’s in his linking of international influences with his own local traditions that his strength lies.” – Peter Bacon, The Jazz Breakfast [UK]

“This is improvisation as a search for freedom, “freedom from”, yes, but also “freedom to”, a key to unlock the doors of music making in the future”. Miles Keylock, Rolling Stone South Africa