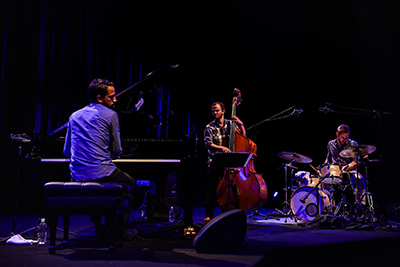 Kyle Shepherd, arguably one of South Africa’s leading progressive pianists and composers of his generation, is fast gaining international recognition for his distinctive compositional style and performances.

The twenty-eight-year-old virtuoso pianist who has a well-established record of celebrated performances in South Africa, Europe, Asia (including Japan, India and China), Canada and the USA, has already released five (5) critically acclaimed albums in his young career. ‘Dream State’, a 21-track double album of his Trio released in 2014, garnered nominations for both the 2015 South African Music Award [SAMA] and a 2015 Metro FM Music Award in the Jazz Category. His debut solo piano offering ‘Into Darkness’, recorded in Japan, was launched with a tour in the South-East Asian country in the same year [2014] and included a performance at the prestigious Tokyo Jazz Festival. Previous releases ‘fineART’, ‘A Portrait of Home’ & ‘South African History !X’, have also attracted SAMA nominations.

The award-winning Shepherd is the recipient of both the coveted ‘UNISA National Piano Competition Award [2015] and the ‘Standard Bank Young Artist of the Year’ Award [2014] in the Jazz Category.

Shepherd who, apart from leading his Trio and performing in concert as a Solo pianist, is also a member of the Carlo Mombelli ‘Stories’ Quartet, Kesivan & the Lights – who performed at Carnegie Hall, New York in 2014, The Claude Cozens Trio, The Benjamin Jephta Quartet and Skyjack (previously Blackbox), a South African-Swiss collaboration which launched their debut self-entitled album in Switzerland in January 2016 and are set to launch it in South Africa in September 2016.

In his debut as a film score writer, the prolific composer recently completed work on scoring all the music for ‘Noem My Skollie’, an independent South African film directed by Daryne Joshua which is set for cinema release in September 2016! Shepherd’s music also features prominently in rising independent film-maker Nadine Cloete’s documentary, ‘Action Kommandant’, which made its international debut release to critical acclaim at the ‘Seattle International Film Festival’ in May 2016 and its local South African debut at the prestigious ‘Encounters South African International Documentary Film Festival’ in June 2016 where it won the Festival audience award for Best South African Film following a record Festival record of 7 sold-out screenings.

Shane Cooper is a bassist, composer and producer based in Cape Town, South Africa.

In 2013 he was selected as the Standard Bank Young Artist for Jazz in South Africa. In 2014 his debut quintet album Oscillations won the South African Music Award (SAMA) for Best Jazz Album. Apart from being a member of the Kyle Shepherd Trio he also regularly works with the Reza Khota Quartet, the Bokani Dyer Trio, Kesivan & The Lights, and collab band Skyjack. In the past he has also performed and/or recorded with artists like Zim Nqgawana, Lionel Loueke, Talvin Singh, Feya Faku, Louis Moholo-Moholo, Malcolm Braff, Nils Berg (The Stoner, Cinemascope), Marcus Wyatt, Soweto Kinch, Afrika Mkhize, Spoek Mathambo, Nonku Phiri, and many more.

As a composer for film Cooper has written music for the award-winning documentaries Forerunners by Simon Wood, Port Nolloth: Between a Rock and a Hard Place by Felix Seuffert, and several others. He also co-composed music with The Restless Natives used in the film Visa Vie by Elan Gamaker, which won a SAFTA in 2011 for Best Feature Film Music Composition.

Cooper also writes and performs electronic dance music under the name Card on Spokes, and has opened for acts such as Little Dragon, Young Fathers, Daedelus, and Clap Clap.

Jonno Sweetman is one of the most original sounding drummers on the music scene in South Africa. His sound and approach attracts attention wherever he plays and in whichever context he finds himself.

Apart from the Kyle Shepherd Trio, Sweetman is also a member of The Reza Khota Quartet and Buddy Wells Quartet. He has performed at the 2008 – 2014 Cape Town International Jazz Festivals, Standard Bank Youth Jazz Festival (Grahamstown) and Joy of Jazz (Johannesburg) and toured Europe with Jonathan Crossley in 2009, 2010 and 2012 and with the Kyle Shepherd Trio in Europe, China and Canada. He has also worked with New York-based saxophonist, Sam Thomas, US guitarist and celebrated proponent of Thelonious Monk’s music, Gary Wittner, also Gordon Vernick (trumpet US) and Nils Berg(SWE). Sweetman has also played and recorded with top South African Jazz artists including Buddy Wells, Marcus Wyatt, Wessel van Rensburg, Herbie Tsoaeli, Rus Nerwich, Jason Reolon, Alvin Dyers, Shannon Mowday and Feya Faku. He also performs with Dan Patlansky, Gerald Clark and Albert Frost, all of whom are renowned blues artists.

“This was an impressive concert with a dramatic variety in dynamics and rhythms. I particularly appreciated the emotion and power the trio put into their performance: this was not the dry-as-dust technically perfect show I’ve heard from some New York players, but a joyous performance.” – Alayne McGregor, Ottawa Jazz Scene, CANADA

“A proud South African, Shepherd is also a striving musician with ears attuned to the cutting-edge, globe-spanning music made by influences such as Vijay Iyer, Jason Moran and Craig Taborn. Much of Shepherd’s concert found him, bassist Shane Cooper and drummer Jonno Sweetman exploring a more craggy and contemporary musical turf, and successfully so.” Peter Hum, The Ottawa Citizen, CANADA

“…music of subtle yet tremendous power… it is music of genuine passion, meditative and stately but always emotionally engaged.” Marcus O’Dair | The Arts Desk, UK