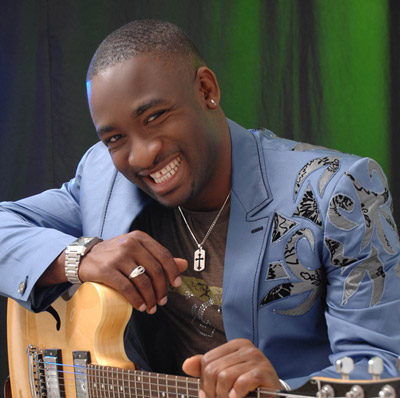 Kunle Ayo, probably Africa’s most celebrated guitarists, has earned several musical accolades, even comparisons with giants of the contemporary school like George Benson, Earl Klugh and locally based Jimmy Dludlu.
This dazzling live performer has 5 albums with the 6th Album set to be released later this year. For every show Kunle Ayo performs in, he leaves his fans inspired and full of positive energy. As one of the most sought after performers Kunle Ayo has participated in a number of jazz festivals, notably the Standard Bank Joy of Jazz International Jazz Festival, the Cape Town International Jazz Festival, Mapungubwe Jazz Festival in Limpopo, Tzaneen Jazz Festival, Ekurhuleni Jazz comes alive, Calabar Jazz Festival in Nigeria and lots more. He recently performed at the handover to Nigeria ceremony of World Economic Forum on Africa, Cape Town, South Africa 2013.

This year, he has also performed at the Tikwe Jazz Festival, Harare international festival of Arts in Zimbabwe, Ugu Jazz Festival , Africa Day concert at the PACOFS, Bloemfontein with many more in the pipeline. He celebrated his 10 years on stage in south Africa on 4th may, 2012 and had Oliver Mtukudzi of Zimbabwe perform as guest artist. Also had the likes of Mxo,Georgie of Kaya. FM, Bryce Anderson, Aniete Ezeimo and a host of others. In October 2012, he released his gospel project named Jazzin up his praise Volume 1 in at The Gathering of Champions which took place at the Excel Centre in London and is due for release in South Africa later this year