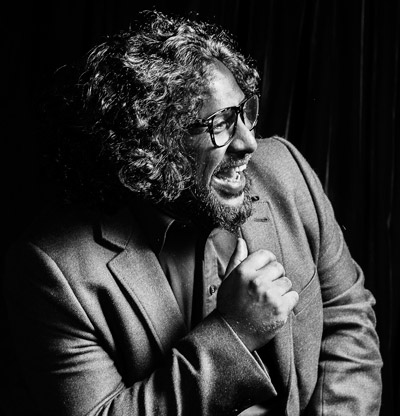 Few musicians bring the experience of freedom—of living in a world that is open and limitless—as intimately as South African jazz drummer and composer Kesivan Naidoo. His music has been hailed by critics as “majestic playing, mind-blowing listening” and “the birth of a new South African jazz sound”. When he performs locally, venues are packed with eager ears.

As one of the first non-white students in a formerly white school, Kesivan grew up in the 1990s surrounded by grunge rockers. For a kid who fell in love with jazz at the age of 10, started performing professionally at 14, it would have been easy for him to sneer at his rock contemporaries. Instead, he listened in. The energy that attracted him relates to his experience of freedom with South Africa’s democratic revolution. Born into the generation of “freedom children”—he celebrated the liberation his parents fought so hard to achieve.

“The rest of the world is looking to my generation for that new sound,” he says. “Miriam Makeba, Hugh Masekela and Abdullah Ibrahim are iconic. Their message was politically driven. Now it’s different. We have a responsibility to forge that new sound of freedom.” This sound is rooted in the art of improvisation, in rapturous expression and radical invention—and most importantly, in listening.

Kesivan graduated from the University of Cape Town with Bachelor of Music (Honors). In 2000 he was the winner of the SAMRO Overseas Scholarship Competition. Later he took up the scholarship in India to study under Prof. Sanjoy Banbopadhyay.

In 2001 he won a SAFTA (South African Film and Television award) for Best Music Composition in a Feature Film. The year after he won the U.C.T Honors (University of Cape Town) counsel scholarship and in 2009 he was the winner of the Standard Bank Young Artist of the Year. In 2010 he released his first album Instigators of the Revolution. As band leader he named his group “The Lights”. The album was nominated for a SAMA (South African Music Awards). His band is  both a testimony to his openness to collaboration and a celebration of a musician coming into his own. As a composer, Kesivan has worked on feature films and documentaries.

Kesivan is a Zildjian Artist endorsing both Cymbals and Sticks as well as New Clear Blasts (Blassticks under his own special name Kezonators). As the Creative Director of Silent Revolution Music, Kesivan is also a music activist. In December 2011 Kesivan co-founded Straight No Chaser (formerlyThe Mahogany Room). A popular live performance space in Cape Town, it was voted one of the 150 great jazz venues of the world by Down Beat Magazine. It provides a platform for creative musicians and supports them, following the model of The Stone jazz club in New York.

In October 2014 Kesivan and his band The Lights performed to standing ovations at the international launch of the album Brotherhood as part of Carnegie Hall’s Ubuntu: Music and Arts of South Africa Festival in New York City.