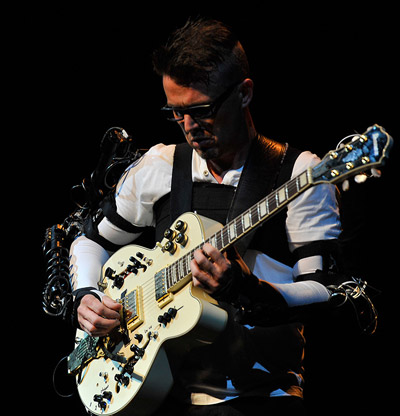 Compositionally his own music has found outlet through ‘The Jonathan Crossley Electric Band’ with this project appearing more than  forty-five times across Europe over the past three years, most notably at festivals in Spain, Slovakia, Turkey and ongoing tours in the Czech Republic where he works with Czech musicians Ondrej Stveracek and Lukas Kytnar as permanent members of the band.

Locally he teaches Classical Guitar and lectures in Digital Music Technology at the University of the Witwatersrand, teaching courses such as Composition and Sound Design for Animation, Studio Production and the final year course ‘Explorations in electronica and electronic musics’. He is busy completing a PhD that investigates the technology/body interface and aims to develop a new guitar-based instrument as part of a greater cybernetic performance system.

He regularly tours with South African artists, appearing at all major festivals, most recently touring with Chris Chameleon in the show Viola! Along with James Grace- for which he also wrote all guitar and percussion arrangements.

He is co-owner of a studio in Johannesburg where he engineers, produces and arranges.