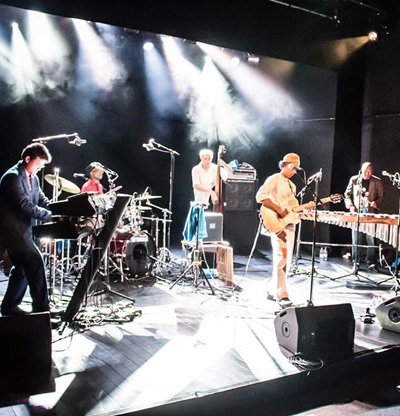 JAV, JOZÉFINN’ AUSTRAL VIEW, is a panaustral project of southwest Indo Oceanic area between countries such Reunion Island , South Africa, Mozambique and Madagascar. First of its kind to gather four countries from this region, it brings a veritable musical syncretism, new in the cultural space. JAV was really born in Antananarivo at Madajazzcar 2013, THE international jazz festival of Madagascar during a residence ; it then really scored the minds during four concerts and a master class which made full room at IFM. This success had like result to be invited to Cape Town at the end of November 2013 for the inauguration of the French Alliance and a master class ; success was also completely at the appointment.

In September 2014, JAV made a tour in Reunion Island very successful and very much appreciated by audience and professionals. JAV occurred in the following referenced rooms : Le Kabardock (City of Le Port), le Palaxa (city of St Denis), Lespas (City of St Paul) and le Séchoir (city of St Leu). Each concert was successful, audience and professionals have totally adhered with JAV concept and perfectly seized, got panaustral spirit of the project that goes beyond purely musical context, this allowed the group to establish an absolute symbiosis. JAV also proposed nice highlights of interactive exchanges, teaching with school (elementary, middle and high school) and a master class at the CRR (Regional Conservatory of Reunion Island).

JAV offers a real musical, cultural landscape of the South West Indo-Oceanic region and Southern Africa. The idea of gathering these countries is to bring a new stone to the South West Indo-Oceanic music and Southern Africa because the musicians of JAV come from extraordinary cultural areas with countless musical wealths. Federate the positive energies of this region, and thus, transcend a cultural potential, still to discover and to make discover, can only strengthen the relevance of such a proposal ; the concept of musical syncretism takes on its meaning in the interaction between Maloya, Sega,
Marrabenta, Niketsche, Salegy, Tsapiky….

Artistic Director and leader of JAV, Jean Pierre JOZÉFINN’ who already had in mind such collaboration since 2008, remains faithful to his line driving : curiosity, openness to others, sharing and artistic exigency. For many years, he leads in the same time and brilliantly his band Jozéfinn’ (variable geometry, from trio to sextet, jazz mixed) In parallel various international collaborations :

Since 2011 till today collaboration with one of the best specialists of timbila in Mozambique Salomao Matchume Zango (bands Timbila Maloya or MozRun trio, trios Mozambique Reunion style “world”, mangrOove, transdisciplinary project with variable geometry (live music or / with dance and video) Reunion – Mozambique – Germany), and currently JAV. This is true encounter between traditions and creation, common denominator by professional musicians whose quality is established, and not tropicalist cultural orientation, or cultural patchworks.

JAV federates beautiful strong and constructive energies, where musicians are really involved, and mindful of the challenge of such a project : the provision of a singular cultural aesthetic and beyond a human common dimension (there are links between the history of Reunion Island, Mozambique, Madagascar, South Africa). JAV’s music is articulated with the Afro-American music commonly called jazz and traditions of each country ; so, this marriage interpellates “common” audience as well as warned music lovers. JAV is a project that aims to be perennial, inherent condition to its objective. We speak here of Cultural Panaustrality of the southwest Indian Ocean and austral area.

JAV, beyond the stage proposes a didactic inter-active aspect where specific directories of each country can be approached by exchanges (school, students, audience backstage …). In its “mission” of teaching transmission, it also offers specific master classes. The musicians of JAV have each one rich experiences (see bios attached) and their journey reflects not only an essential will to their progress, their artistic blooming but also an opening to another ; The cultural diversity component to them, beyond the artistic aspect, one of the fundamental basics of balance of the societies between them.