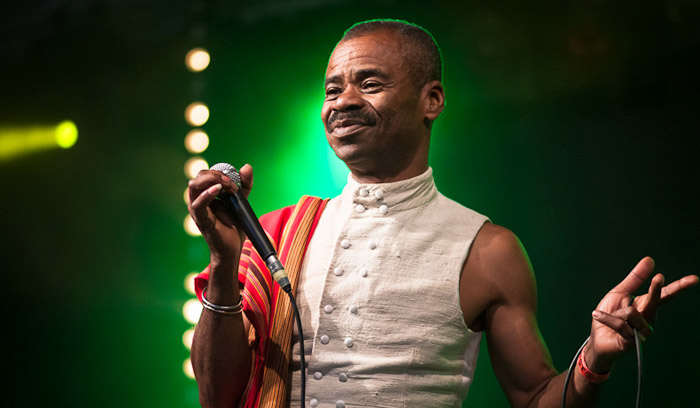 Eusèbe Jaojoby (born 29 July 1955), commonly known by his surname Jaojoby, is a composer and singer of salegy, a musical style of northwestern Madagascar. Critics consider him to be one of the originators of the modern salegy style that emerged in the 1970s, and credit him with transforming the genre from an obscure regional musical tradition into one of national and international popularity. Jaojoby also contributed to the creation of two salegy subgenres, malessa and baoenjy. Jaojoby has been called the most popular singer in Madagascar and the Indian Ocean islands, and is widely referred to as the “King of Salegy”. His success has earned him such honors as Artist of the Year in Madagascar for two consecutive years (1998–1999) and the role of Goodwill Ambassador for the United Nations Population Fund in 1999.

In 1972 Jaojoby began singing in the northern coastal town of Diego-Suarez. He performed with bands that were experimentally blending American soul and funk with the Malagasy musical traditions of the region. The artist gained popularity and toured regionally, producing four singles with The Players before the band broke up in 1979. After a short break in the 1980s to pursue a career in journalism, Jaojoby resumed his musical career and rose to national prominence with his 1988 hit “Samy Mandeha Samy Mitady.” He then reoriented his career toward music, recording his first full-length album in 1992 and becoming a full-time professional musician the following year. He has since released eight full-length albums and has toured extensively in Madagascar and abroad accompanied by his wife and adult children, who perform in the band with him.
After several years having focused entirely on his career with the Regional Information Service, Jaojoby was approached in 1987 by Frenchman Pierre Henri Donat to contribute several recordings to Madagascar’s first salegy compilation album, Les Grands Maîtres du Salegy (“Grand Masters of Salegy”). The runaway success of one of the tracks he composed and performed, “Samy Mandeha Samy Mitady”, elevated salegy from a regional genre to one of nationwide popularity, leading a newspaper to declare him the “King of Salegy”. High demand for live performances led the singer to return to Antananarivo in 1988 to form a band named “Jaojoby” that included former bandmates from Los Matadores and The Players. Jaojoby begin touring regularly at home and abroad, performing his first international concerts in Paris in 1989. In the meantime, he worked as a press attaché for the Ministry of Transport, Meteorology and Tourism from 1990 until 1993, at which point he left his job to become a full-time musician.

The 1992 release of Jaojoby’s first full-length album, titled Salegy!, was facilitated by fRoots magazine editor Ian Anderson, who had worked with Jaojoby to record several of his tracks for a radio broadcast two years previously. Jaojoby’s second album, Velono, was the first salegy album to be recorded in France, as well as the first of his albums to be produced in a professional-quality recording studio. Following the 1994 release of Velono, Jaojoby became a regular on the international music festival circuit and has performed at such events as WOMAD in Reading, the Festivale du Bout du Monde in Brittany, WOMEX in Spain, the Festivale des Musiques Métisses in Angoulême, the MASA Festival in Abidjan, and similar events in Germany, the Netherlands and Portugal. Jaojoby’s excitement over his rise to international celebrity was attenuated by the 1995 death of the band’s original drummer, Jean-Claude Djaonarana, who had first performed with Jaojoby as a member of Los Matadores.

Jaojoby’s success and popularity attained new heights in 1998 with the release of E! Tiako. He was named “Artist of the Year” in Madagascar for two consecutive years (1998–1999), and the single “Malemilemy” received regular airplay across the island more than a year after the album was released.I n July 1999, Jaojoby was named Goodwill Ambassador to the United Nations Population Fund and supported the United Nations’ activities in Madagascar related to raising awareness of sexually transmitted diseases, unintended pregnancy and other concerns relevant to the Malagasy youth population. The lyrics of his songs commonly address social issues, typified by a track on E! Tiako that encourages the use of condoms to avoid contracting HIV/AIDS.

Aza Arianao was recorded over five days in the summer of 2000 and released the following year. In the wake of its success, Jaojoby performed at a political rally to an audience of 50,000 partisans of candidate Marc Ravalomanana less than a month before the divisive 2001 presidential elections that nearly resulted in the secession of the island’s coastal provinces. Jaojoby’s 2004 follow-up album Malagasy, which was recorded in semi-live conditions on the island of Reunion in a small venue before an audience of the artist’s friends, featured lyrics that sought to promote optimism and national reconciliation; the artist announced that he would not involve himself in national politics in the future. The same year he toured extensively in France, the United States and Canada.

The March 2008 release of Donnant-Donnant celebrated Jaojoby’s roots as a cabaret performer of soul, funk and other Western popular genres. The track listing included previously unreleased pop songs written by the artist in the 1970s and 1980s in French, Malagasy, Creole and English. Later that year, in September, he became the second Malagasy musical act (after supergroup Mahaleo, in 2007) to perform at the prestigious and historic Olympia music hall in Paris. Seating was specially removed at his request to provide space for dancing. The live album Live au Bato Fou: Jaojoby was released in 2010 and features a diverse sampling of Jaojoby’s greatest hits. A selection of new salegy tracks written and performed by Jaojoby was released in 2012 under the album title Mila Anao.