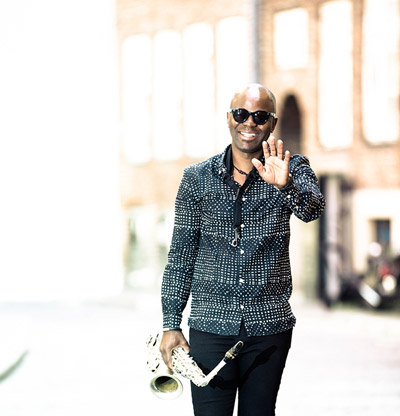 Saxophonist and composer Ivan Mazuze, started in his home country, Mozambique. He has grown to become one of the continents most dynamic and talented musicians. He has in the last four years represented “world jazz” coming out of Norway at numerous music events and festivals in many parts of the world in collaboration with Norwegian based cultural institutions such as Arts Council Norway and Music Norway. His latest released album Ndzuti (2012), is a great collaboration of sounds from Cuba, Norway, Southern and Western Africa. Ivan Mazuze is Honors degree in jazz and composition tudies and Masters graduate in Ethnomusicology at University of Cape Town.

Mazuze has amongst other received various recognitions and awards for his works:

Mazuze emerges from a long tradition of jazz musicians in southern Africa. Mazuze is continually an important representation for this genre. Mazuze performs with his own group and as a freelance has participated with artist such as: Bugge Wesseltoft, Omar Sosa, Manou Gallo, Steve Wilson, Carmen Souza, Raffaelle Casarano, Piero Delle Monache, Hermeto Pascoal, Jaco Maria, Jimmy Dludlu, Hotep Galeta and many others.

“Ivan Mazuze’s Ndzuti is the cheapest way to get a scent of sun, salty breeze and sand between your toes. Sit close to the speakers, there is the shadow that bloom” …
by: Lennart ”Mr Z” Olausson, Sweden (2012).