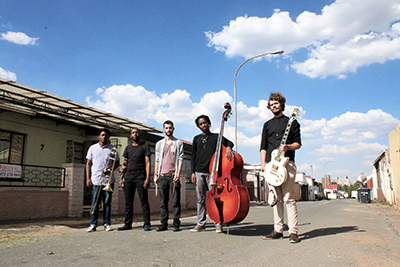 iPhupho L’ka Biko is a pan-Afrikan band based in Johannesburg which was founded in 2015 by Nhlanhla Ngqaqu. Ngqaqu is an electric/upright bassist & composer and works with various musicians from time to time in this project, performing his compositions. His influences are Afrikan Spiritual and Traditional songs, Gospel and Jazz music. Moses Molelekwa, Bheki Mseleku, Richard Bona and Christian McBride are amongst the many musicians that have had an impact in his approach to music. Ngqaqu completed his BMus degree at Wits University in 2016 under the mentorship of Carlo Mombelli and Andre Petersen. In his own accord, he has performed with various musicians and has been to Norway a number of times for the Oslo Jazz Festival (2015) and a Jazz improvisation camp in Sogne (2016).

The Xhosa word ‘iPhupho’ metaphorically refers to God who is the giver and fulfiller of dreams and ‘Biko’ refers to the noble Bantu Biko who was influenced by the great Africanist Mangaliso Sobukwe, fathers of Black Consciousness and Pan-Afrikanism in South Africa. iPhupho L’ka Biko seeks to conscientise and spiritually awaken the masses through music. With just over a year since the band has been established, iPhupho is already making waves in the music scene and only greater can be expected in the near future.