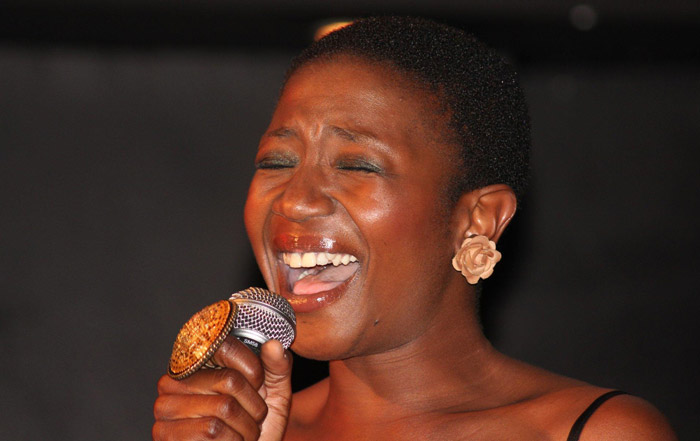 Hlulani Hlangwane is a South African born Jazz singer with a uniquely distinctive voice.
Her tone places her squarely in the field of classic jazz divas and her Tsonga heritage gives her a creative and competitive edge among other jazz singers.

2008 was a milestone in Hlulani’s career as she was selected best vocalist of the year by the Standard Bank National Youth Jazz Band.

The Standard National Youth Jazz Band experience took her to the next step in her career where she shared the stage with world renowned musicians such as RnB American singer Joe, The Spinners, Judith Sephuma, Jimmy Dludlu, and Hugh Masekela. Returning from her three month Vietnam tour in 2009, she has performed with the likes of Herbie Tsoaeli, Ayanda Sikade, Lucas Senyatso, Mlungisi Gegana and Nduduzo Makhathini to name a few. The music in Johannesburg has led Hlulani to be heard by one of the most influential musicians in the country, Themba Mkhize.

They have worked closely on an SWR big band project that has toured in
Germany in 2009 and 2010.

While Hlulani continues to sing in and around Gauteng, her passion for music has led her into a path of teaching music to aspiring young musicians. While she was teaching Voice and Theory at Kingsmead College between 2011- 2013; Hlulani has influenced more than 100 students to continue their education in music at a University Level. In 2014 Hlulani went on to start her own music school, which is currently running with a satisfactory number of students.

From 2013 to this day Hlulani is now performing and running a family restaurant in centurion. This business has opened doors for so many musicians in and out of South Africa. She hosts these bands on a weekly basis for three years in succession to date.

African Chef is now one of the few live music venues in Pretoria filling minimizing a shortage of gigs for musicians in the country.