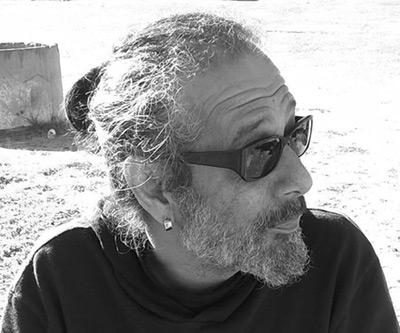 Composer and multi-instrumentalist, Hilton Schilder was born into a musical family in Lotus River, Cape Town. He is the son of esteemed South African jazz pianist Tony Schilder (1937-2010) and nephew of Chris Schilder of Cape Town’s groundbreaking jazz-fusion group of the 1970s, Pacific Express. He was given his first instrument, a drum, at the age of three.

Hilton’s musical trajectory has taken him through a variety of groups and collaborations in the capacity of both a composer and a performer. He partnered with Mac McKenzie in the mid-80s to form the Genuines, a rock outfit that channeled the folk music of the Cape through punk. The band’s first two releases on the Shifty label tethered them to the broader Voëlvry movement and cemented their legacy in the history of South Africa’s alternate music scene.

Post-Genuines, Hilton immersed himself more deeply into jazz and was a member and contributing composer of Robbie Jansen’s Sons of Table Mountain. In the early 2000s, he performed with the Goema Captains of Cape Town and released his first solo album entitled No Turning Back on Mountain Records in 2003. He was the project leader of the South African/Swiss jazz ensemble Iconoclast in 2008.

In 2010, Hilton fought cancer, losing a kidney in the process. While in hospital, he heard what would become the composition “Rebirth” during a morphine-induced lucid dream. Waking up bedridden and without access to an instrument, he memorised what he could recall of the piece by moving his fingers over the mental projection of a piano keyboard on the hospital ceiling.

“Rebirth” is a spiritual masterwork by a seasoned musician at the height of his powers – a sonic journey of sweeping light and shade that is both personal and universal in the depths it traverses. The piece is issued over two sides of a vinyl 7-inch single in a sleeve featuring Schilder’s distinctive ink drawings.