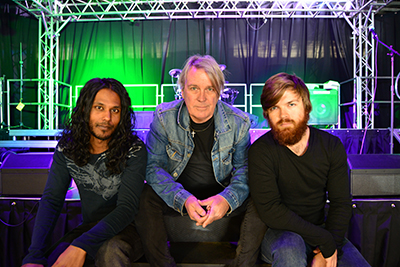 Highway Jam is a South African blues-rock, funk jazz-fusion band that was founded by Durban-born surfer/muso, Mike Meiring, in the early 1990s. It emerged from the shady streets of Melville, Johannesburg, as a blues-rock/garage-grunge band with a strong surf culture credo of ‘living life to the fullest and partying hard’. After changes in the line-up, and since having added jazz-fusion and world elements to its style, Highway Jam has been pushing a ‘music for music’s sake’ agenda in a variety of genres. Its overriding focus has been on freedom of musical expression and artistic creativity.

Mike Meiring had reasonable success in Durban and Johannesburg in the 1980s as lead guitarist with popular Durban band The Street Rockers, with their song “Don’t cry without emotion” topping the Radio 5 charts in the late 1980’s.

However, owing to work and family commitments, the band dissolved, and Mike moved up to Johannesburg to pursue new music opportunities as a session muso.

Once there, one of Mike’s first musical encounters was with Kai Horsthemke, Reuben Samuels, Wendy Oldfield and Steve Walsh in 1988 (the early photos of Mike, Kai and Reuben were taken at “Jaggers” during a jam with Wendy, Steve, and Willem Möller). A couple of years later, Mike was invited by Steve to perform in a show around Johannesburg and Pretoria called “Déjà Vu”, a tribute to Crosby, Stills, Nash and Young, with Kai, Reuben, Garth Victor, Tam Minter and Lionel Bastos. He jumped at the opportunity, and many later encouraged him to take his music ‘up a notch’. Highway Jam was born, the name of the band signifying the inspiration of Jeff Beck.

Highway Jam initially comprised drummer Steve De Kock and bassist Donovan Thatcher. The band soon became a hugely popular draw card, packing the then notorious “Roxy Rhythm Bar” with Highway Jam enthusiasts. Its raw and energetic style of rock & soul offered devotees a powerhouse experience and introduced them to original gems such as “Down”, “Looking for Adventure” and “Who Cares”. The band was a regular feature at the Roxy and in Rockey Street. The early ’90s also saw the release of the band’s first album, “2 B Played Loud”.

Apart from the club gigs, Highway Jam played at various festivals, including Rustlers, Splashy Fen and Oppie Koppie – until 1997, when the band broke up.

Reluctant initially to carry on under the Highway Jam banner, Mike soon changed his mind and, in its Mark II version with Kai and Reuben, embarked on a more collaborative and wide-ranging musical approach. This ushered in a creative, synergistic period, with funk, jazz and world music influences, and marked the evolution and development of their most intense and experimental work.

Mike describes this time as the “tipping point” for Highway Jam, a time of explorative musicianship and total musical expression. It was during this period that spontaneity and freedom of mood, and rich and intricate melodies, harmonies, and rhythms came to represent the band’s unique style.

Following the controlled madness of “Grasslands”, 1999 saw the genesis of “Always Being”, a song-orientated album inspired by lessons learnt from Mike’s late father. It featured Mike on guitars, harmonica and vocals, Kai on basses, Ekkie on saxophones and alto recorder, the Mal Daves on drums & percussion, Lynne Poulsen on backing vocals and keyboards, and Debbie Rivett on backing vocals. Although slightly more conventional in approach, it still maintained an explosive, untamed edge.

By 2000, a stable line-up of Mike, Ekkie, Kai and drummer Brett Collings saw the band revisiting their eclectic mix of jazz and world music influences, leaning towards hip-hop grooves. This proved an irresistible combination, and Highway Jam was voted best jazz band, regionally and nationally, in the prestigious “Old Mutual Jazz Encounters”.

In 2003, the band recorded another largely instrumental concept album, “Highway Jam Goes Wild”, which focused on musical representations of African animals. Tongue-in-cheek track titles included “Hip Ou”, “Mere Cat”, “Chuitar”, “Dung B Tell”, and “∏thon”. This period saw the influences of John Scofield and John Abercrombie on Mike’s playing, in addition to the work of Jeff Beck. The next few years saw rather little live work. Reuben returned to the drum chair, and the band played a few explosive gigs, but the departure of Ekkie for the UK saw the remaining band members working mainly with other artists.

Throughout the years, Highway Jam collaborated with Kathy Raven, one of the band’s all-time favourite singers (Mike and Brett also having played in her band The Feather Doctors, and Kai having worked with her on “Fruit Bowl”), on albums such as “Love Seed”, featuring Mike, Pete Sklair on bass and Reuben, as well as “The Rooibos Tea Blues”, featuring multi-instrumentalist Ben Amato, Mike, Kai and Reuben.

To rekindle the love and friendship, musical bonds and synergies between Kai, Reuben and Mike, the band embarked on Saturday recording sessions, beginning in 2013. This project was initiated by Reuben, following his lengthy stay in Abu Dhabi and Dubai, using his newly acquired ProTools software. It started as an informal Saturday get-together in Kai’s lounge, jamming a few Highway Jam tunes and recording them for the fun of it. Initially a completely relaxed and unforced meeting of old mates, the tunes and songs soon took on a life of their own, and a decision was made to take things a little more seriously. Reuben and Mike added to their individual studio equipment, built suitable studio spaces in their respective homes, and began sharing recording, mixing, mastering and production duties.

This marked the birth of the latest release, the album “The Road Less Travelled”, a mixture of progressive blues, jazz and South African grooves that are testimony to the deep esteem in which the trio of musicians hold each other. This production was a four-year journey that also proved a valuable educational lesson in sound engineering for both Reuben and Mike. All editing, mixing, mastering and brand marketing of the CD, including the graphic design aspects, was handled by the Highway Jam team, including Patch Meiring and Jayde Platt.

Together with “The Road Less Travelled”, 2017 marks the re-release of all Highway Jam albums. Details will be made available on the Highway Jam website, together with notifications of concert and other events.

Highway Jam is looking forward to what the future brings and is currently in the process of writing new material. The Jam continues

Tyler Meiring has recently joined Highway Jam, replacing Kai as bass player. He has been with Highway Jam since conception, making him an ideal candidate for the role. Having grown up with the music, he brings his own distinctive style and youthful wildness into the Highway Jam mix.

Romaine Soobramoney has recently joined the Highway Jam on the drums. His secure groove, dynamic intensity and sensitivity to light and shade adds whole new dimension and freshness