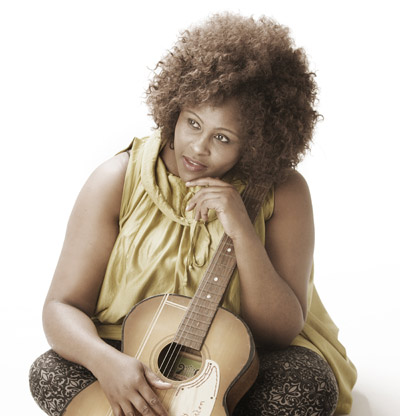 Born in Mofolo and raised in Pimville, Soweto, Gloria’s career began in the church choir. A production at the Market Theatre in 1993 earned her a scholarship to study opera at the Pretoria Technikon. Gloria has shared the stage (both locally and internationally) with too many music greats to list here, but including the likes of: Sibongile Khumalo, Moses Molelekwa, Tananas, Concord Nkabinde, Sipho Mabuse, Vusi Mahlasela, Sipho Gumede, Oliver Mtukudzi, Victor Masondo and Hugh Masekela…

She has performed in London and Amsterdam and at theatres and festivals in Australia, Angola, France, Finland, Nigeria, Namibia, Zimbabwe, Lesotho, Swaziland, Botswana and also did a tour in South America (Chile, Argentina, Peru and Venezuela).
She has also performed successful in Algeria as part of the PAN African festival. In 2010 she was part of a theatrical production called African Songbook, which was staged at the Arts Cape, Cape Town. She was also part of the Shanghai Expo in China in July 2010.
In 2011/12 she did theatre work for Porgy & Bess and Mandela Trilogy. She toured the UK with that production and was nominated for the Naledi Awards.

On theatre stage, she performed in Jubilation, Milestones and the Lion & the Lamb staring John Kani.
On the small screen, she appeaed as a cast member on Soul City and Muvhango.
In 2011 & 2013, she performed alongside Hugh Masekela on “Songs of Migration” at the Market Theatre and the Joburg Theatre.
She recently did the Standard Joy of Jazz with Lizz Wright and Kurt Elling.
She also performed in an extravaganza called “Daughters of the King”.
For the 20 years of South African Democracy celebrations, she performed in Mumbai and Dehli, India. This year, she performed at the National Arts Festival in Grahmastown at the Monument and SBYJ. She also performed at the opening of the Standard Bank JOJ at the Sandton Convention Centre.
She also worked as a presenter in community radio station Rainbow FM for their drive-time slot.
She is also an occasional voice over artist for radio campaigns and she was a TV presenter for Jazz Indaba on ETV.