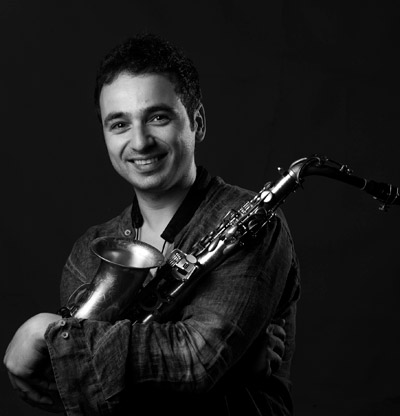 “One of the best italian jazz musicians” in 2013 and “one of the best talents to emerge” in 2010/2011 according to the charts of “Musica Jazz” magazine Gianni Denitto comes to jazz with a wealth of experience in classical, electronic, and rock music. He earned two Bachelor degrees with honour in Jazz and Classical music after 11 years studying at the Conservatory in Italy. Proud Endorser of Rampone&Cazzani saxes and Roland Europe for RC 505. His first album as a leader was released in 2012 by Universal Music Italia.
He collaborated with Italian Embassy in Beijing and Dakar, Italian Institute of Culture in Beijing Shanghai Delhi and Mumbai, Italian Consulate in Perth and Calcutta.
He taught in international art academies such the Kathmandu Jazz Conservatory, Beijing Contemporary Music Academy, Yunnan Art University (china), Global Music Institute Delhi and True music school Mumbai.
More infos on www.giannidenitto.com (press, photos, music, concerts)

“BRAIN ON A SOFA”
Brain on a Sofa is the solo saxophone performance with electronics by Gianni Denitto. In this project Gianni wants to tell his story: his experiences in different kinds of music, his travels, the cultural contaminations. An experimental solo sax project, pairing Jazz acoustics with electronic sound, exploring the nuance of saxophone and the boundaries of Jazz. Brain on a Sofa is also an album, his second one as a leader. The first one was released by Universal Music Italia. The audio tracks are freely downloadable from december 19th 2014 on www.giannidenitto.com. Thanks to the creative loop machine RC 505 (Roland Europe artist from 2014) and some external samples, Gianni is able to create original songs with a very personal sound, which include both free style and detailed arrangements.

LISTEN THE FULL BRAIN ON A SOFA

List of main past performances – BRAIN ON A SOFA