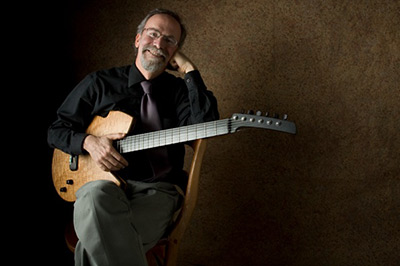 Guitarist Gary Wittner has been delighting audiences of all ages for over 25 years, performing and teaching music on 5 continents world wide. He has represented the United States three times: twice as a Kennedy Center/U.S. State Department Jazz Ambassador and once as a Fulbright Grant recipient. He has been a featured artist in numerous concerts with many jazz luminaries including Clark Terry, Christian McBride, Reggie Workman, Richard Davis, and Eddie Gomez. A popular clinician, Gary regularly presents workshops at the K-12 and college level throughout the United States.

As a performing guitarist, Gary works in many contexts from solo guitar to larger jazz ensembles. His arrangements of traditional Blues/Folk Americana for solo guitar have been performed worldwide and can be heard on 3 of his CDs. A member of New York based Trio WAG, Gary also performs Latin music with several bands in the northeastern United States. He has traveled to Ecuador 10 times, performing jazz standards, Latin music, and his original compositions. Gary has recorded 2 CD’s with tuba legend Howard Johnson and continues to compose, perform and record worldwide. Most recently he has been performing his original vocal compositions, which have been heard live in concert, on National Public Radio and on his most recent CD, “Did I Say That Out Loud?”.

A specialist in the music and life of Thelonious Monk, Gary has presented concert/lectures on Monk at many of the world’s most prestigious music schools including the Berklee College of Music (Boston), The New School (New York), The Guild Hall School of Music (London), and The Rimsky Korsakov Conservatory (St. Petersburg), and Indiana State University (Bloomington). His book, “Thelonious Monk for Guitar”, published by Hal Leonard, continues to be popular throughout the guitar playing world. Additional articles written by Gary have been published in Guitar Player, Coda, and the International Association of Jazz Educators Journal. A friend of the Monk family, Gary has performed for Mrs. Nellie Monk, and been interviewed on the radio with Thelonious Monk, Jr.

Currently Gary teaches at Bowdoin College and The University of S. Maine School of Music. He lives 2 hours north of Boston where he received a Maine Arts Commission Grant in 2006.