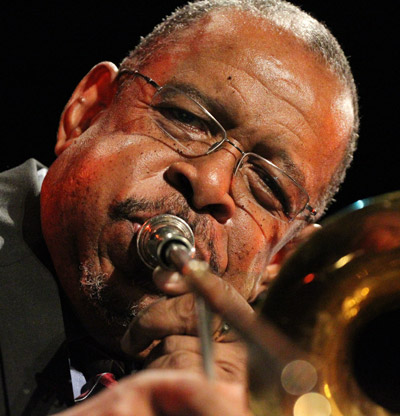 Wesley was born the son of a high school teacher and big band leader in Columbus, Georgia, and raised in Mobile, Alabama. As a child he took piano and later trumpet lessons. He played baritone horn and trombone in school, and at around age 12 his father brought a trombone home, whereupon he switched (eventually permanently) to trombone.[1]
During the 1960s and 1970s he was a pivotal member of James Brown’s bands, playing on many hit recordings including “Say it Loud – I’m Black and I’m Proud,” “Mother Popcorn” and co-writing tunes such as “Hot Pants.” His slippery riffs and pungent, precise solos, complementing those of saxophonist Maceo Parker, gave Brown’s R&B, soul, and funk tunes their instrumental punch. In the 1970s he also served as band leader and musical director of Brown’s band the J.B.’s and did much of the composing and arranging for the group. His name was credited on ‘Fred Wesley & the J.B.’s’ recording of “Doing It to Death,” which sold over one million copies, and was awarded a gold disc by the R.I.A.A. in July 1973.[2] He left Brown’s band in 1975 and spent several years playing with George Clinton’s various Parliament-Funkadelic projects, even recording a couple of albums as the leader of a spin-off group, The Horny Horns.
Wesley became a force in jazz in 1978 when he joined the Count Basie Orchestra. He released his first jazz album as a leader, To Someone in 1988. It was followed by New Friends in 1990, Comme Ci Comme Ca in 1991, the live album Swing and Be Funky, and Amalgamation in 1994.
In the early 1990s Wesley toured with his colleagues from the James Brown band, Pee Wee Ellis and Maceo Parker, as the JB Horns. With the departure of Ellis the band became The Maceo Parker Band. Wesley was featured trombonist with Parker until 1996 when he formed his own band, The Fred Wesley Group, now known as Fred Wesley and the New JBs.
Wesley’s 35-year career includes playing with and arranging for a wide variety of other artists including Ray Charles, Lionel Hampton, Randy Crawford, Vanessa Williams, The SOS Band, Cameo, Van Morrison, Socalled and rappers De La Soul, to name a few. Many other artists have sampled his work.
In 2002 Wesley wrote Hit Me, Fred: Recollections of a Sideman, an autobiography about his life as a sideman. Also in 2002 he recorded an album entitled Wuda Cuda Shuda.
Wesley served as an adjunct professor in the Jazz Studies department of the School of Music at the University of North Carolina at Greensboro from 2004 to 2006, and now works with students as a visiting artist at numerous other schools including Berklee College of Music and Columbia College of Chicago. In addition to performing with his own band, he is currently touring as part of a collaboration called Abraham Inc. along with Klezmer artist David Krakauer and Klezmer/hip-hop artist Socalled.
In 2007, Wesley accepted an invitation to contribute to Goin’ Home: A Tribute to Fats Domino (Vanguard). He participated with Lenny Kravitz, the Rebirth Brass Band, Troy “Trombone Shorty” Andrews, Pee Wee Ellis and Maceo Parker to contribute their version of Domino’s “Whole Lotta Lovin’.”
In 2010, Wesley contributed to Kings (Freestyle Records), the fourth album by Israeli funk and groove ensemble, The Apples. Specific sessions on the album were dedicated to working with Wesley, one of the group’s heroes.[3]
(Source Wikipedia)