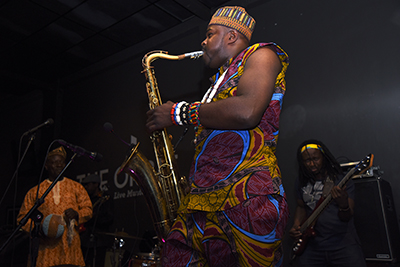 A Yoruba proverb tells us that a refugee first consults the elders of the village for consent and blessings before he cultivates the cornfields allocated to him. Nigerian singer and saxophonist Femi Koya was not a refugee. But in 2005 when he arrived in South Africa, he paid homage to his host country with the release of his debut album, Just in Newtown. The multi-genre recording was inspired by Newtown, Joburg’s cultural hub. It featured songbird and trombonist Siya Makuzeni and Nigerian guitarist, Kunle Ayo.

Just in Newtown was a beautiful salute to the vibrant jazz and pop scene that was expressed in the cultural precinct’s iconic venues such as Bassline, Shivava and Niki’s. “The place was buzzing with live music and social life second to none,” he recalls. “It was daunting but exciting at the same time.”

“Just in Newtown captures my musical experiences in Newtown and incorporates various styles and genres I was exposed to during jam sessions in clubs such as Shivava. My album reflects these styles.” It was well received – a success that inspired him to work harder at his craft while at the same time tackling whatever industry-related challenges he met head on.

Ten years later Femi Koya is back with a magnificent sophomore album titled Iba, a Yoruba word for homage. “The album is a tribute to all the musical prophets of the continent – both the living and the departed; from Bob Marley to Mama Africa. He says the recording is also a salute to some of Africa’s illustrious freedom fighters like Obafemi Awolowo, Steve Biko, Patrice Lumumba and Robert Sobukwe.
And it is a homage that is also extended to diasporan Africans who have inspired the continental struggle for freedom – from Marcus Garvey to Malcolm X. Iba is also about a personal journey and homecoming. “I’m part of the new Africa on the move, where home is about a multiplicity of places and influences,” he explains. “Africa will have its true homecoming when people start to see themselves as primarily African. Until then I will make music about this homecoming and what the future holds if Africans unite. This is our destiny.”

Themes of continental unity, global solidarity and human rights are captured in powerful songs like “Africa Unite” (featuring Soweto Gospel Choir) and “Human Rights”. The latter features South African poets Lisa Combrinck and Pitika Ntuli. They deliver searing verses about the plight of African refugees in places like home affairs offices where they suffer humiliation and exploitation in the hands of unscrupulous immigrant officials.

The fourteen-track Iba is a majestic recording that eloquently captures the beauty of African music in its diversity. Inspired by childhood idols like Fela Kuti, the king of Afro-beat and Manu Dibangu, the founder of soul makossa, Femi’s expansive and expressive musical vocabulary combines Afro-beat, highlife, jazz, gospel and contemporary dance grooves to produce some of the finest harmonies captured on vinyl. Femi sings and blows with the verve and warmth that is reminiscent of these West African giants. Despite his talent, he is quick to point out that he is still a pupil of the craft. “I admire their compositional and songwriting styles. They have created evergreen music that talks to the future. I hope one day I can achieve that.”
Recorded for a year between May 2014 and June, Iba was launched at Joburg Theatre on 27 August to critical acclaim. It features no less than 30 artists from South Africa, Democratic Republic of the Congo, Ghana and Nigeria. These include accomplished South African musicians like Kenny Mathaba, Stompie Manana, Prince Lengoasa and Pops Mohamed.

The multiplicity of voices in his songs creates a conscious musical and social dialogue between West and South African artists. It is a dialogue that promotes a culturally integrated Africa and strives for love, unity and respect for human rights among Africans regardless of their backgrounds or social station. In “Africa Unite” he sings about taxi drivers and women at marketplaces as some of the ordinary folk who also deserve a decent existence under the African sun.

“This album has transformed my career in a big way,” he says. “It has taken it to another level and opened up other possibilities for future recording projects. I’m grateful to all these artists who have made it a reality.” Fresh from a stirring performance at the Arts Alive’s Jazz on the Lake (6 September) where he sang a duet with juju queen Angelique Kidjo, he is already planning a West African tour before the end of this year.

Born Olufemi Ogunkoya in Lagos, Nigeria in 1981, his musical talents were evident from early childhood when he used to dance with traditional drummers in his father’s compound. After dabbling on piano and trumpet, he eventually settled for a saxophone. The music of South African artists Yvonne Chaka Chaka and Hugh Masekela was also part of his musical upbringing.

Last year his musical pendulum swung full circle when Chaka Chaka invited her to contribute saxophones on her latest album, Amazing Man. The recognition from the Princess of Africa is a far cry from his humble beginnings when he first landed in South Africa ten years ago with nothing but hope and a determination to make it against all odds. He had been invited by a South African-based Nigerian church to work with a choir as its coordinator with promises of a regular salary and accommodation.

But within a week of his arrival in the Promised Land, his hopes were dashed when the church authorities told him that they were experiencing financial difficulties and could not contribute to his upkeep. For some time he was stranded on the streets of Yeoville. “It was tough, but I persevered. Every day I would walk around carrying my saxophone and approaching anyone with musical instruments,” he recalls. His fortunes eventually changed for the better when someone directed him to Newtown – a space that enabled him to pay homage to his adopted land in true Yoruba tradition.

Catch Femi Koya at the Joy of Jazz on 25 September where he will perform with a South African jazz ensemble that will include Steve Newman, Tlale Makhene, Pops Mohamed, Mabi Thobejane and Lucas Senyatso.