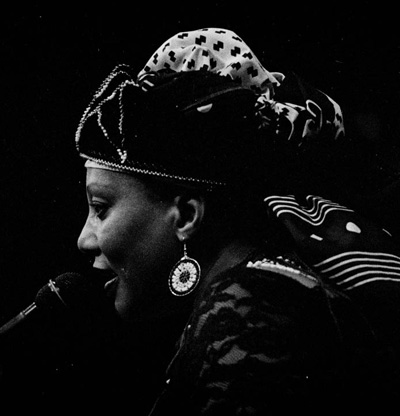 Faith Kekana, one of South Africa’s renowned musical supporting acts has embarked on her solo career. In tandem to this, she has released her debut album, Areyeng which showcases her versatile musical prowess.

Faith first entered the music scene in the 1980s. She was the founder member of the girl trio Shadii together with the late Anneline Malebo and Tshidi Leloka. Shadii enjoyed great acclaim and soon became the supporting acts to Bayete.

In the early 1990s, Faith was to become the supporting singer to Hugh Masekela; Jonas Gwangwa; Caiphus Semenya and Letta Mbulu and Miriam Makeba. All above secured her voice for both live concerts and studio recordings. Needless to say, this wealth of experience gained through these collaborations is evident in Areyeng.

The well-travelled songbird boasts credits on many album recordings. She featured with the late Moses Moleleka; Vusi Mahlasela to name a few.

Mama Africa has travelled extensively with her. They worked together in the Tribute to the late Dolly Rathebe.

Areyeng transports you through South Africa’s rich cultural tapestry. Faith is of the Ndebele tribe yet she holds her own in her rendition of Zulu songs. Areyeng is truly an experience to behold.