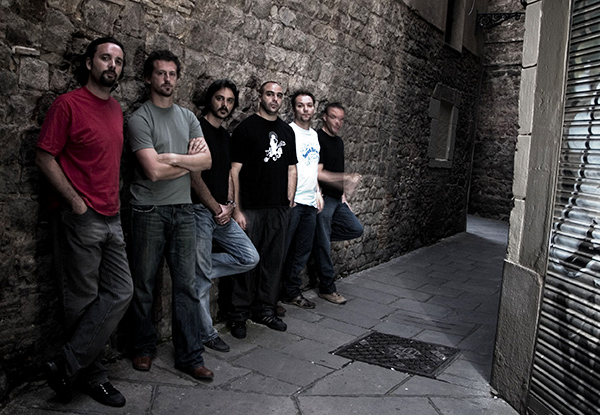 Escalandrum is one of Argentina’s most successful tango and jazz musical ensembles led by Daniel “Pipi” Piazzolla, a multi-award winning drummer and composer and the grandson of one of Argentina’s most revered tango masters, the illustrious bandoneonist and composer Astor Piazzolla. Escalandrum’s repertoire includes the broad range of Astor Piazzolla’s legendary tango compositions as well as the band’s own music, which draws much more on contemporary jazz and brings together the best of these two worlds.

Interestingly, Escalandrum does not include a bandoneonist nor a vocalist, and the band is made up of Pipi Piazzolla on the drums, Nicolás Guerschberg on piano, Mariano Sívori on double bass, Damián Fogiel and Gustavo Musso on saxophone, and Martín Pantyrer on saxophone and clarinet.

The band has maintained its original lineup for 17 years, releasing 9 albums. Six albums are of original music: Bar los Amigos (2000), Estados Alterados (2002), Sexteto en Movimiento (2004), Misterioso (2006), Visiones (2008), Vértigo (2013) and 2 albums are interpretations of the works of Astor Piazzolla: Piazzolla Plays Piazzolla (2011) and Las Cuatro Estaciones Porteñas (2014). Their most recent album, 3001, is a collaboration with Argentinian singer Elena Rogers who has released three albums as well as performed lead roles in musicals such as Evita, Piaf and Les Miserables on Broadway and London’s West End. 3001 was released in November 2016 to a sold out audience of 2000 people at the Teatro Coliseo in Buenos Aires.

Escalandrum has toured to more than 30 countries and played at festivals including the Montreal International Jazz Festival and the Festival Cervantino in Mexico and venues including Birdland in New York. They have collaborated in performance and recordings with artists such as Julieta Venegas, Paquito D’Rivera, Dave Holland and even Marty Friedman (ex-guitarist for Megadeth). Escalandrum has won a number of awards and prizes including the Konex Platinum Award in 2015 for Artist of the Decade. In 2014, Pipi Piazzolla was named as an Outstanding Figure in Culture by the city of Buenos Aires, and Escalandrum was declared of Cultural Interest. Their 2011 album Piazzolla Plays Piazzolla won a triple award of Best Jazz Album, Best Album of the Year and Gardel of Gold for from the Gardel Awards, the most important music awards in Argentina, and secured them a Latin Grammy nomination for Best Instrumental Album.