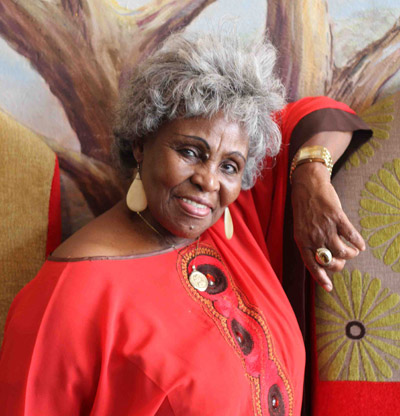 Dorothy Masuka is an African musical treasure, one of the continent’s all-time greatest vocalists and performers, and one of its greatest and most prolific composers as well.

She was born Dorothy Masuku (‘Masuka’ is actually a miss-spelling that originated with the record labels on her earliest recordings) in 1935 in Bulawayo in what is now Zimbabwe but which was then the British colony of Southern Rhodesia. She arrived in Johannesburg aged twelve as a student at a Catholic boarding school and came of age just as the first great flowering of urban African culture in South Africa was getting underway in the early 1950s. At that time, a critical mass of wage-earning African migrants to the cities began to provide the financial underpinning for a variety of cultural activities of which musical entertainment was among the most prominent. Dorothy made her first record at age sixteen in 1951 and by 1953; she was already a fully-fledged professional musician. Indeed, she was a fabulously successful musician: as a first-rate singer with an immediately identifiable voice and style, she was in constant demand for live appearances and tours around the country while at the same time she maintained her status as one of South Africa’s best-selling recording artists.

A great deal of this popularity was due to the fact that not only was Dorothy a wonderful vocalist but she also possessed the even rarer gift of being able to write great songs. A number of the tunes that she first recorded and that were hits during the ‘Golden Era of Township Jazz’ in the 1950s are today regarded as African classics. As in the case of most African songs of that earlier era, Dorothy’s compositions were usually ‘message songs’, grounded in the everyday realities of urban African life and society, so it is not surprising that as she grew older and more aware, and the political atmosphere became ever more heated, Dorothy began to write songs criticising the government’s apartheid policies.

Eventually, she was advised that she had best leave South Africa before the authorities closed in on her. For several years thereafter, she used her musical talents to help support independence movements in Kenya, Tanzania and Malawi and then, shortly after settling back into her native-born Southern Rhodesia, she was forced into exile a second time when the white supremist regime of Ian Smith wrested control of the territory from England. Placed on a ‘subversives’ list, Dorothy fled to newly-independent Zambia where she spent the next sixteen years, singing and recording on occasion, but making her living as an airline hostess for Zambia Airways (during which time she survived two air crashes.)

In 1981, when the Smith government was finally brought down and an independent Zimbabwe established, Dorothy returned to the country and resumed her full-time musical career. In 1992, against the backdrop of imminent political change and a general easing of apartheid era policies, Dorothy was finally allowed to come back to South Africa. She found a very different musical culture to the one she had left behind some thirty years before, but Dorothy was determined to rebuild her career and in fact, her timing was perfect: South African audiences of all ages across all the racial boundaries seemed eager to explore, or to renew an acquaintance with, an almost forgotten and suppressed chapter of the country’s musical heritage. From that time and up to the present day, Dorothy Masuka has justly taken her place as one of South Africa’s great musical veterans.