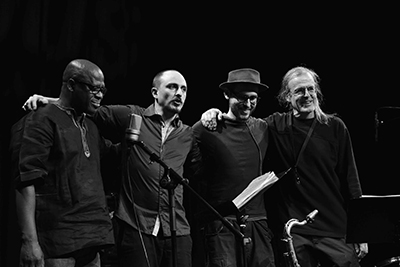 “…always focused and alert, Dominic Egli is quick to respond and constantly up to the moment…” (AvU)

“…like a boxer, Egli dances and weaves around the bassist…” (Bund)

Egli, with his many-faceted drumming style which encompasses a dynamic spectrum from full-throttle power to an airy intimacy, has been the engine behind more than 45 CDs.

His sound aesthetic is rooted in tradition which, together with his stylistic diversity and melodious communicative approach to improvisation, have made him a musician who has accompanied both international stars and numerous creative bands from Switzerland.

Last but not least, his compositions have deeply influenced the bands K:E:B and Miniatur Orchester.