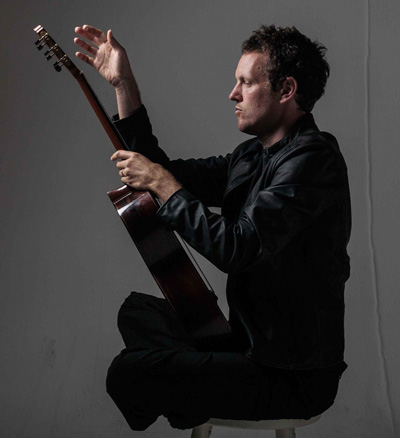 “Gripper has brilliantly transferred [the kora] repertoire onto a regular six string guitar. He sees [Toumani] Diabaté as the Segovia, or indeed John Williams, of the kora, championing it as a solo instrument. And Gripper brilliantly takes it back to the guitar. He’s opening a whole new repertoire of classical guitar music.” [Simon Broughton]

So reads the Evening Standard’s review of Derek Gripper’s two sold out concerts at Shakespeare’s Globe theatre with legendary classical guitarist John Williams, just a little over a year after the release of his 2012 recording “One Night on Earth: Music from the Strings of Mali.” In this album Gripper arranged and performed on classical guitar the compositions of three of Mali’s greatest instrumental virtuosos: Toumani Diabaté, Ali Farka Touré and Ballaké Sissoke. The extraordinary feat of this recording can only be imagined when one considers that this music was originally composed for and played on the kora, a 21 string African harp-lute, one of Africa’s most beautiful and complex instruments. UK’s top world music publication Songlines Magazine called the album ”a staggering achievement,” selecting the recording as a Top of the World album in March 2013.

Gripper’s output extends beyond Africa to include original compositions, interpretations of the works of Brazilian composer Egberto Gismonti, collaborations with classical Indian tabla, innovation of South African folk sounds, and arrangements of J.S.Bach’s solo violin works. Classical Guitar Magazine called Gripper’s 2011 recording of original compositions set alongside the works of Gismonti “an excellent album…of hypnotic beauty” whilst Guitar International says of the same album that Gripper’s world class ability “is able to transcend the instrument itself.”

“Gripper has cracked it…his playing has a depthless beauty, which does full justice to the complexity of Toumani’s compositions. To do so without any hint of the music being dumbed down is a staggering achievement on solo guitar.” [Nigel Williamson, Songlines Magazine] Read the full review here:

“More than a labour of love, Gripper has brought a new purity to the dream-like improvisatory nature of these compositions. My recording of the year, so far!” [Tim Panting, Classical Guitar Magazine]

”The result is astounding, not just for its technical brilliance, but its musicality. Gripper executes these pieces with the precision and attention to detail one might expect from a great classical musician…It’s hard to imagine a more impressive and passionate rendering of Malian music on classical guitar.” [Banning Eyre, Afropop Worldwide]
“A true synthesis and a great album.” [Ian Kearey, fRoots]