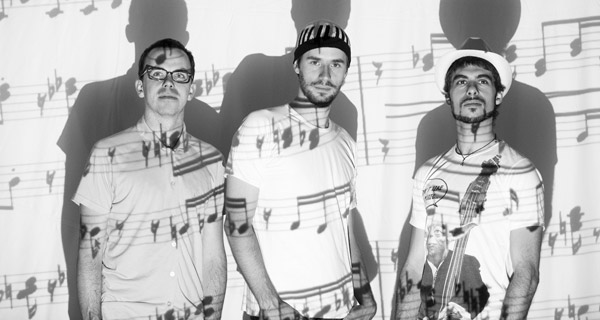 “It is a luxury, to be able to perform and develop pieces for some time before recording them”, David Helbock asserts happily. He met the partners for his most recent album, the two Viennese Raphael Preuschl and Herbert Pirker, back in 2010 when he moved from his old home Vorarlberg to the Austrian capital. “The two are very active in various formations and have been a well attuned rhythm section since 15 years”, Helbock says, “their playing goes perfectly with my compositions.”

In these years since 2010 the multi-award-winning 30-year old pianist created an international stir first and foremost with his non-conformist trio Random/Control. Its highly concentrated use of diverse brass and woodwind instruments presented and presents itself thus far on two albums and in many concerts as a virtuoso, witty anomaly. Helbock’s current trio shows unconventional and humorous facets as well. Raphael Preuschl (*1977) is not plucking a double bass or an electric bass, but a bass ukulele. „It sounds very loud and percussive, in some way quite African, which suits my music well“, Helbock explains happily. Herbert Pirker (*1981) plays his drums accordingly dynamical, sometimes almost eruptive. In lyrical passages highly sensitive, in fast moments with pronounced energy and hard beats that almost resemble rock esthetics. Pirker works with jazz-players (e.g. Louis Sclavis) as well as with pop bands, for example with the rapper

Fiva alias Nina Sonnenberg from Munich. He is certainly not a quiet drummer; his powerful entries accentuate the occasionally ragged charm of Helbock’s pieces.
Before the trio went to the Berliner “Traumton Studio” the musicians were touring all around the globe. They gave a guest performance in Mexico, toured through Australia, played in the Czech Republic and in Morocco, amazed audiences in Kuala Lumpur, Addis Ababa and Vladivostok. In this way the intuitive accordance grew, from which they benefited during the recording. “We were playing in one room without headphones and afterwards neither cuts nor overdubs were done”, Helbock describes the creative and lively atmosphere in the studio. The fun the trio was having is also apparent on the CD, especially because Martin Offik’s production captures the intensity of the moment and gives a feeling of immediate closeness.

“I like playing with different projects, to avoid falling into a routine”, David Helbock says, “but the duo with Simon Frick and even more so Random/Control are rather work-intensive. Thus my desire to put together an uncomplicated band grew.” Thereby Helbock does not mean the music itself. “The pieces of the new album are hardly less complex and we also have a few older, rearranged compositions in our repertoire”, the now Berlin-based key-magician sums up. “But the denseness of events is less. Through more transparent arrangements the focus is more on the music.”

The trio purposefully thinned out the instrumentation more and more. Raphael Preuschl at some point concentrated entirely on the bass-ukulele and David Helbock left out all keyboards and electronics. “For a while I was looking for new sounds and tried out many things. Ultimately though, I came to the conclusion that I can create more interesting sounds by manipulating the strings of the piano”, David Helbock describes his current focus on the mechanical possibilities of the grand piano. Preparing the piano has been generally common since John Cage, Helbock however is more inspired by George Crumb’s ideas. “I only use manipulations that I can remove again quickly”, he explains, “and when I pluck strings by hand or strum
chords on them, I mark exactly in advance in what spots I get a certain sound.” So when Helbock reaches into the interior of the piano, he outgoes the traditional level of spontaneous improvisation and aleatorics and rather makes this action a cleverly devised part of his composition. Of course improvisation happens nonetheless. For example in the late-romantic sounding introduction to “Horus and Jesus”, which Helbock plays without accompaniment, and likewise in his transcendation into three Schönberg variations on the current album. “About two years ago we were invited to the Outreach Festival in Tirol, where Schönberg was the topic. There was an exchange of letters between Schönberg and Kandinsky and I decided to improvise about Kandinsky’s pictures”, David Helbock outlines the story behind these three variations. “Of course I could just play a jazz-solo after the main theme, but I find that dull”, Helbock describes his aspiration, “so I try to continue Schönberg’s motifs in his style.” In this way David Helbock’s touch mutates the classic into a timeless game of deception, in which even reminiscences of blues can flash up.

Also “Öpfili”, already known from Random/Control, experienced a form of transformation. Its main melody is rooted in folk music; its crazy, driving groove comes from Helbock though. He also makes reference to his all-time heroes Hermeto Pascoal and Thelonius Monk again, to each with self-composed pieces. “Even though there are also other musicians that amaze me for shorter times, I always come back to Monk and Pascoal, because they both stayed true to their own thing so consequently.” Pascoal’s unconditional devotion fascinates Helbock, just like Monk’s individual style, “Unifying composition and improvisation instead of isolating them as in the old style.” Artistic decisiveness is unquestionably also a trait of David
Helbock’s character. In every new production the variable virtuoso surprises with personal ideas, thumbs his nose at the Zeitgeist and exhibits impressive profile.