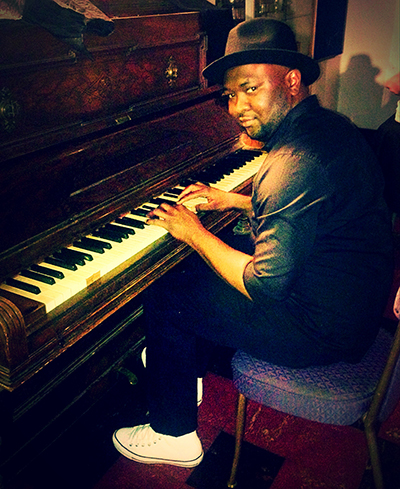 Darlington Okofu is a pianist and composer, born to a family of 3 children in the bustling city of Lagos ,on the 24th of June, 1985.

As it was the experience of many young children of his time, he started playing drums at the age of 12 and only got introduced to the piano by his late older brother at the age of 16. It was love at first touch of the piano for him. In the years that followed, he aggressively sought knowledge of the instrument.

With the music career scarcely recognized and encouraged in Nigeria, he would find himself torn between his newly found love and the expectations of his parents to pursue studies in a different discipline.

In the winter of 2007, Darlington took the bold steps to relocate to the RSA in order to pursue his musical dreams.

Despite having not studied music formally, he has made the best of the ever-growing technology available to this generation, to advance his knowledge. Amongst many pianist, he found mentorship in great piano players like Mncedi Kupa, Joey Calderrazo, Oscar Peterson, Herbie Hancock, Chick Corea, Bheki Mseleku, and Kenny Kirkland.

Darlington has performed and recorded with some of the finest musicians that has ever emerged from Africa. Some of which are: Selaelo Selota, Judith Sephuma, Brenda Mtambo,
Victor Ntoni, Khaya Mahlangu, and Faith Kekana, just to name a few.

With the years Okofu has spent in South Africa being the most formative of his career, his compositions come through with a freshness that cannot be singularly attributed to neither South or Western Africa.

His lively and energetic performance has earned him much recognition in the industry and he has continues to deliver in any genre of music he finds himself performing.