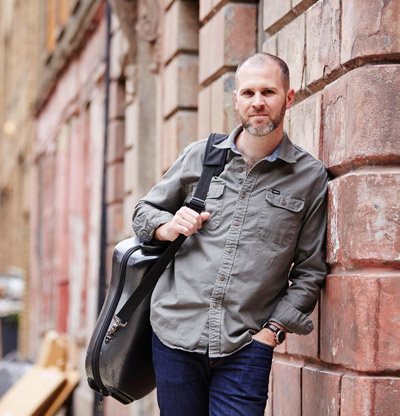 Dan Shout is a respected, sought-after jazz saxophonist based in Cape Town, South Africa. He is most renowned as a session saxophonist and for his seven-year stint with Johnny Clegg.

Dan has performed in over 30 countries across five continents. A few of his career highlights include performing with the South African National Youth Jazz Band at the North Sea Jazz Festival in The Hague with Carlo Mombelli (2004), playing with the combined University of Cape Town/University of Kwazulu-Natal Jazz Octet lead by Darius Brubeck and Mike Rossi at the I.A.J.E. in Long Beach, California (2005), and a multitude of national and international performances with Johnny Clegg.

Dan holds a Masters Degree with Distinction in Jazz Performance and Jazz Analysis. In addition to his work as a session musician, he is a part-time lecturer at the South African College Of Music at the University of Cape Town (Saxophone, Jazz Styles & Analysis, and Ensemble). He also presents workshops at conferences, festivals, and music clinics both in South Africa and abroad.

His latest project, has is a display of great storytelling through music. Martin Wolfaardt wrote:

“In With a Shout is a contemporary, African jazz-fusion project lead by saxophonist Dan Shout featuring music arranged for three tenor saxophones.
The compositions reflect Shout’s life-trajectory through Southern Africa – his family’s emigration from Zimbabwe, his formative years in the Namib Desert, and his spiritual homecoming to the slopes of Table Mountain where he now resides.

The music is infused with the sounds and souls of the music and musicians Dan has been exposed to, and with whom he has performed – luminaries such as Winston Mankunku Ngozi, Darryl Andrews, Mike Campbell and Johnny Clegg to name a few.”