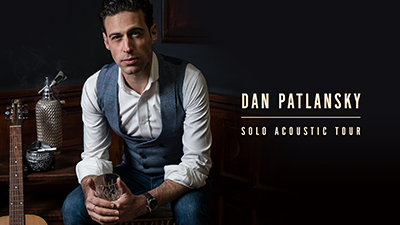 Never far from likeminded genius, guitarist, singer/songwriter and globally respect-ed purveyor of the blues, DAN PATLANSKY sidles into his second successive decade as one of the world’s finest blues-based storytellers of his generation.

Ever since his debut album, Standing At The Station, followed by his 2004 major la-bel (Blue Note, EMI produced) masterstroke True Blues, Dan Patlansky has been immersing himself in the rich and rollicking world of blues rock music. In February 2005, and again in July 2006, Selwyn Miller, the New Orleans based manager of Da-vid Gates, Bread, Randy Crawford and Petula Clark (amongst others), took Patlan-sky to New Orleans to showcase his outstanding talent.

As Dan settled into his groove, what followed was a barrage of brilliantly executed eclectic and acoustic blues albums. 2006 brought with Real, Move My Soul in 2009, 20 Stones in 2012, and the unplugged wonder of 2013’s acoustically anchored Wooden Thoughts release.

With each new release, Patlansky’s albums brought with him a tighter and more engaging lyrical twist and even more interesting turns, all of which led beautifully to his much anticipated 2014 full- electric album released in May. In December 2014, DEAR SILENCE THIEVES (produced by Theo Crous) was voted the nr. 1 Blues Rock Album in the world released for 2014 by BLUES ROCK REVIEW/USA, alongside names such as Joe Bonamassa, Rival Sons, Devon Allman, The Black Keys, Philip Sayce, and many more.

“After over a decade of making albums for us, Dan’s seventh album continues to deliver the goods that have made him the premier blues rock guitar player in South Africa, if not one of the top in the world.” – Kevin O’Rourke, Blues Rock Re-view, USA.

Dan started 2014 off with a bang when he was chosen to open for BRUCE SPRING-STEEN in front of 64 000 people at the FNB Stadium in Johannesburg in February on his High Hopes tour. Dan was personally approved by Springsteen as support act, seeing as Springsteen rarely has guest artists for his shows. Also a milestone for Dan’s career when he played in front of the biggest audience he has ever played to.

After touring Europe in 2013 with Everlast, Dan returned to the continent in Octo-ber 2014 for another tour to promote Dear Silence Thieves internationally. He im-pressed Norway when he headlined the FJORD BLUES FESTIVAL with words such as ‘magic’ and ‘religious experience’ used to describe his performance.

With successful shows in the Netherlands and Germany, Dan ended his European tour by headlining the HORSENS BLUES FESTIVAL in Denmark, a festival where he played at the ‘Showcase Stage’ in the basement in 2013.

After Dear Silence Thieves was voted the nr. 1 Blues/ Rock Album in the world by Blues Rock Review USA in 2014, Dan received raving reviews in European and in-ternational press for the album. Dear Silence Thieves was released in the UK on 27 April 2015, the same day he performed a launch showcase concert at The Border-line in London. Dan also visited Europe in May, June and July and performed shows in the UK, Poland, The Netherlands and Germany.

In March 2015, legendary guitarist JOE SATRIANI announced Dan Patlanksy as spe-cial guest on his UK Shockwave November 2015 tour. The tour stretched over the course of 31 days, 10 countries and 25 shows.

In May 2016, Dan released the follow up album to Dear Silence Thieves with Theo Crous helming the production, entitled INTROVERTIGO. Patlansky used his personal life experiences as inspiration for the album to ultimately marry good songs with gui-tar playing, and the album has been received with critical acclaim both in SA and abroad.

Dan kicked off 2016 with his Sweet Home Africa Solo Acoustic Tour, followed by his INTROVERTIGO album launch tour in April in South Africa. In May 2016, Dan per-formed as special guest on award-winning Blues Rock band, KING KING’s nation-wide UK tour, performing 26 shows over the course of May and June 2016 in Ger-many Netherlands and the UK. Back in South Africa, Dan completed a nationwide solo acoustic tour.

Dan completed 2016 on a high note when INTROVERTIGO was voted as the #1 Blues Rock Album in the world released in 2016 by BLUES ROCK REVIEW/USA, becoming the first artist ever to place #1 on Blues Rock Review’s Top 20 Albums Of The Year twice (Dear Silence Thieves 2014, Introvertigo 2016). The album was also voted #8 of the Top 15 albums of 2016 by Blues Magazine.

DAN returned to the UK in April / May 2017 touring with special guest Ash Wilson. This marked Dan’s first UK tour since he supported King King in 2016, and Joe Satri-ani’s 2015 Shockwave UK/European tour.

DAN PATLANSKY’s brand new album, PERFECTION KILLS was released worldwide on 2 February 2018. The album was recorded at Scherzo Productions, a recording studio in Dan’s home town of Pretoria, South Africa. Dan chose Scherzo because he wanted to make a different sounding record from his last two albums and he felt Scherzo supported his vision. All the songs on PERFECTION KILLS were recorded and engineered by Jaco Naudé at Scherzo Productions, mixed by Stefan Swart in South Africa and mastered by Pete Lyman at Infrasonic Mastering U.S.A.

DAN produced the album himself, something he hasn’t done in years. “I learnt so much working with Theo Crous, who was the producer on my previous two al-bums, ‘Dear Silence Thieves’ and ‘Introvertigo’. I worked on pre-production and songwriting with Theo on a couple of the tracks for ‘Perfection Kills’ and applied what I learnt to the recording and production process of the album.” says Dan.

“‘Perfection Kills’ is all about my vision of making a record that still makes the songwriting a priority as in the past; the final product delivers a far more real and organic result.”

What sets the new album apart from its predecessors is the honesty and live sound of the songs. DAN specifically recorded the 10 tracks to come across very close to what they will sound like when performing them live. PERFECTION KILLS is an album Dan has wanted to make for a few years now, setting out get the sound and produc-tion in his head across to listeners in a raw and charmingly rough way.

DAN started writing songs and recording the new album in 2016. “I got together with the band once I had basic ideas and messed about with them in a rehearsal space for a week,” reflects Dan. “I went back, tweaked a few and then we were ready for the studio. The recording process was semi-live and took two weeks to complete.”

‘Perfection kills’ is a concept that Dan whole heartedly believes in: “In any art form perfection doesn’t exist because there is no yard stick to measure it by. The pur-suit of perfection ends up doing far more harm to the art than good. This was the mindset we adhered to when we went into the recording studio, ‘Why try to be perfect?’”

DAN returned to the UK during March 2018 where he played a SOLD OUT album launch tour for PERFECTION KILLS, followed by a South African launch tour when he returned home. He will be returning to the UK again in November 2018.

NOMINATED AND RATED #2 IN THE CATEGORY OF TOP 5 ‘OVERSEAS ARTIST OF THE YEAR’ – BRITISH BLUES AWARDS, SEPTEMBER 2016